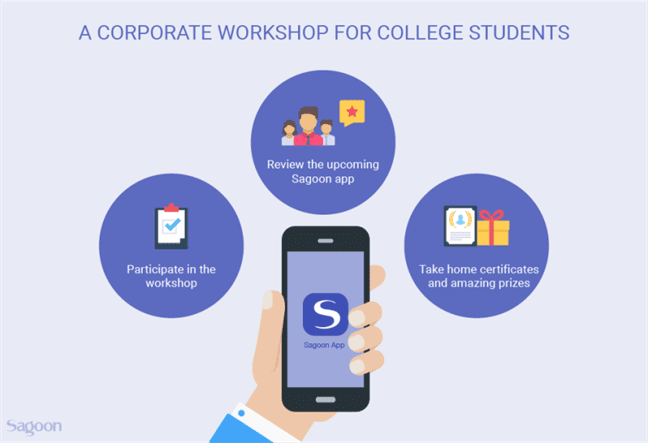 Sagoon is going to conduct an exciting workshop for college students to review the upcoming youth-centric Sagoon app.

Sagoon’s IPO: How To Invest?

A study suggests – if one has investments equal to $100 in one of the world’s leading taxi services ‘Uber’ in 2010 than that amount now equals one million dollar value. Yes, it’s a big opportunity in itself even to be able to invest in the IPO of start-up company says the company. Similarly, Sagoon Inc is also now moving ahead in the global market carrying the same opportunity.

Now Nepalese from all over the world are now investing in the Social network, Sagoon’s IPO. But many are still confused regarding Sagoon’s IPO closing coming November 30. The company has also considered people’s thinking wisely before deciding to invest in it as correct.

The company currently is now doing a lot of work lately to establish its social network widely. The company has offered Sagoon’s IPO from America to aid that particular task. Also, this will also help financially in increasing the number of Sagoon users, adding new features and starting a mobile app for Sagoon.

People can now easily invest in Sagoon via debit and credit card. America made laws for start-up companies only enabling them to offer this service relating to its IPO starting from 2012.

It was not possible for general people to invest in Facebook and Twitter in such a way. But now Nepalese have got a significant opportunity to invest in Sagoon which is also following a similar pattern.

Govinda Giri further says Sagoon was developed based on the monetization of social media concept. Giri, who left his job as a system engineer for the ministry of defense, America for developing Sagoon says that Sagoon was continued in the belief users of Sagoon receiving up to 5% share of the profit as well.

Bearing its originality, Sagoon has called Nepalese from all over the world for investments. As the company is in its initial phase, so there’s a lesser risk, but more significant opportunities for investors as Giri said.

‘It’s risky to invest in us, but people can make $100000 from $100 after three years only by investing in a company like ours’, Giri added,‘But we have urged people time and again not to invest in their future depends on the invested money. It’s good to invest much after calculating the risk which they can handle. The company can also go down.’

Sagoon is currently listing its mini IPO for the public meaning now individuals can be investors, not just accredited investors. Sagoon Inc. has released 21% or 869565 of its shares equal to $20000000 value to the general public.

Nepalese although inside the country cannot invest in Sagoon, Nepalese residing in abroad can spend as much as they like. Buying a share value of Sagoon will cost you $23 only.

Since investments are not allowed to go outside Nepal, only Nepalese living abroad have this opportunity. There is no maximum amount limit set for those wanting to invest. Investors have to follow some guidelines.

Those Nepalese residing abroad legally and owning a local bank account can only invest in the company. To invest, you can apply via www.sagoon.com/invest. For those having difficulty applying online, the company has also provided a live call for support.

Before this, approximately 4000 people were found to be interested in investing up to $70000000. American stock market had granted the company to offer its shares, and the shares were made available according to the Jobs Act 2012.

Company shares although it will not be listed in America’s stock market at the time. But following the initial public offering, the company’s share will be enlisted as the founder, Giri said.

The company’s value is said to be equal to $9300000. It is also preparing to launch its application worldwide from India by this December.

‘We are trying to get the Prime Minister to launch our app,’ Giri said, ‘More than 40 people are working as a team in India currently.’

The amount collected from the company’s IPO is said to be used for the company’s growth. The company as well as planning to put almost 30,00000,00 rupees back to Nepal as foreign investment from the money raised.

It also aims to build a call center in Nepal from that money along with other necessary tasks for the company.

The company is also planning to develop a procedure that allows 5% share ownership to its users. Sagoon at present has 10,00000 users.

We have not marketed for users till date, now we will focus on that too,’ Govinda Giri said, ‘Our growth is indeed very well. If the company grows at this rate, we will certainly hit our target. We have that kind of willpower and team as well.’

Giri told that they are preparing for the provision of 5% share ownership that Nepalese inside the country will be able to acquire, given they are users of Sagoon.

The source of income will be the advertisements on Sagoon. Further, the company is also planning to develop smart cards in the future that will provide users with discounts offered by America along with other countries and services of sending parcels to whom they want.

Sagoon has planned to bring that social, smart card among its users. The company also aims to provide its users with such smart cards free of cost after completing their profile and gets bound with Sagoon. Sagoon user can then use such smart cards to send gifts to their relatives and can also buy and give gift cards.

The company has also projected that its users will be benefitted by having to use only a smart card than many gift cards.

Moreover, it has also proposed that according to the scheme, every user will get fixed money back after buying items. Likewise, it is also developing a system which enables charging the mobile phone via their application.

Users can make emoji and sticker according to their mood via Mood Talk in private or group chat. Messages in Sagoon disappears automatically after the conversation is closed.

Users can also know the number of users and their countries and cities who have viewed the secret by tracking his/her shared secrets. Many features are also being added to this.