An Apple ID will get $15.39 on the dark web. Dark web is a hidden network of sites that allow people to communicate anonymously. Also, Netflix login costs $8.32. PayPal account fetches the most costing $247. Similarly, logins to Amazon and Walmart will each require $9. On the other hand, dating site login information charging the user $2.60. Not everything on the dark web is illegal.

According to the new research, the average customer values their data at £3,241. WEF report said that 15 billion devices connected to the internet by 2015 and around 50 billion by 2020. The data stored on the internet is predicted to grow as time passes. Internet revenues have also increased sharply over the last ten years Which is of no surprise.

Data is the currency of the internet age as companies have increased. And it allows people to pay for their digital services with information rather than capital. So, how much is your data worth? According to a new survey in digital storage company Western Digital of 5,000 consumers, the average consumer values their personal information is £3,241. Personal data are roughly categorized into three types as volunteered data, observed data and Inferred data. 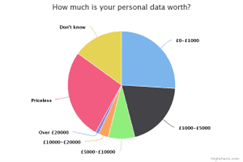 Men tend to value personal data more highly than women. The average male is placing a value of £4,174 on his data whereas £3,109 for women.

Women are less likely to “sell” their data, with 31 pc telling their data are priceless compared to 23pc of men. 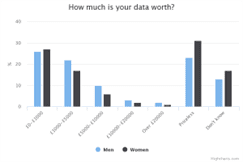 Similarly, older people are less likely to sell their data than the younger generation of peoples. 32pc of the 45 years and above describing the data of them is priceless compared to 24pc of those aged between 16 to 24. Ages of people between 25 and 34 consider themselves the richest demographic regarding valuable personal data. And £4,174 as a particular average value in this age group.

This research and analysis also claim that many customers and consumers in the UK still prefer to own content outright rather than rent or stream it. The more confidential the data, the more valuable it is. Even the cybercriminals are not willing to pay as much for the stolen financial data. According to the recent report by Intel Security Groups McAfee Labs, the average estimated price for stolen debit as well as for the credit cards is $20 to $35 in the UK.

The Authentic Way to Get Geolocation of any Contrivance With Kali...