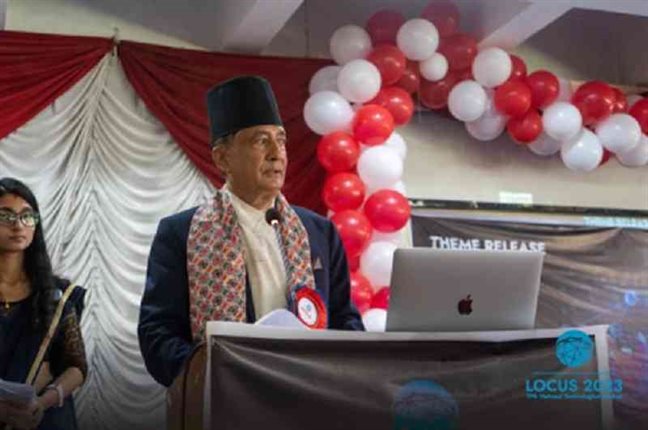 LOCUS is a non-profit organization led by the students of Computer, Electrical, and Electronics Engineering from Pulchowk Engineering Campus.

Since its commencement in 2003, LOCUS has always provided a platform for innovative and creative minds from schools and colleges to showcase their talents.

It organizes a 3-day festival along with a lot of pre-events where participants from different corners of Nepal compete for their glory and explore the new technology.

On 7th August 2022, LOCUS hosted a major event “Theme Release 2023” where the major theme for this year was announced. And the announced theme for LOCUS 2023 is “ Digitalization and Intelligent Automation: Reshaping the Future”.

LOCUS is more than honored to have its esteemed Chief guest, the Honorable Minister of Information and Communications, Mr. Gyanendra Bahadur Karki to the event.

He talked about encouraging youths in innovate and bridging the gap between industrialization and innovation.

He provided valuable suggestions to the committee, motivated the students, explained the policies of the government regarding technical fields, and even promised to help the organization in the coming future.

The special guest of the event, the Dean of IOE, Prof. Dr. Sashidhar Ram Joshi emphasized the related projects that could be accommodated with the theme of LOCUS. His strong and effective words resonated with the technical audience.

Likely the special guest of the event, Chief IT Consultant of the Prime Minister’s Office Er. Dipesh Bista highlighted the difference between digitization, digitalization, and digital transformation and enlightened the existing as well as upcoming policies of the Government of Nepal related to the technological field. He also stated that the theme for LOCUS 2023 coincides with the government’s digital Nepal framework initiated in 2019.

Prof. Dr. Subarna Shakya, head of the IT innovation center, highlighted the importance of the theme on the development sector of Nepal.

Being already involved in the digital transformation and digital Nepal framework, he stated the fact that LOCUS makes students innovative and competitive which is an essential factor for the engineers to improve their creativity.

Dr. Indra Prasad Acharya, Campus Chief of Pulchowk congratulated LOCUS for maintaining its identity for almost 2 decades by continuously serving the technological world of Nepal and wished the team for their successful tenure.

Likely the respected staff, teachers, and professors from the advisory board as well as from the campus administration add esteem to the event.

The program concluded with the speech of the chairperson, Coordinator of LOCUS 2023, Mr. Tapendra Pandey with his promise to make LOCUS the best platform for students to present their ideas and innovations.

Also said that the theme was released to create a fusion between industry and academia and requested the government to make technology-friendly policies and asked for help from all the technological stakeholders with the resources that students need.

From hosting the event to arranging and managing the requirements of the program, it was a complete success and LOCUS 2023 wants to thank all the helping hands for this grand success of the LOCUS 2023: Theme Release.