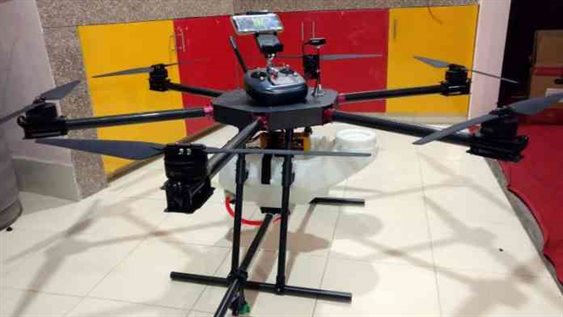 Shambhu S Siwakoti, Ujjwol Ghimire, and Shishir Sapkota all three are electronics and communication engineers. They have established a drone designing & manufacturing company named Madhukaa Drone Services. They launched the company on 5 December 2017. Since it was the first of its kind drone manufacturing company in Nepal, registering it at the Office of Company Registrar was very difficult. They had to go through numerous meetings to make the officials understand what their product is and how the company works. 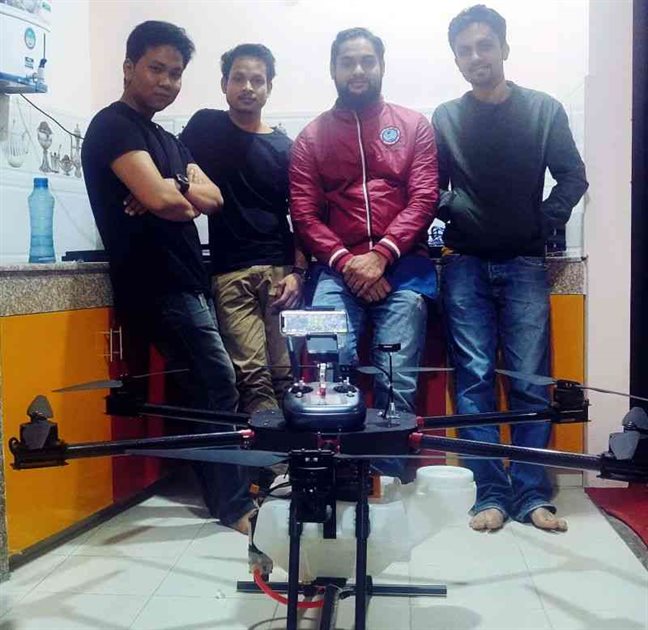 The team recently demonstrated the drone manufactured by their company at ICT Startup and Innovation Mela organized by Living with ICT magazine (watch this video). Secretary from the ICT Ministry, officials from the National Youth Council, CEOs of renowned companies, and entrepreneurs were present to watch the drone’s work and appreciated their effort.

The team imported parts and materials like motor, carbon fiber, and controller from abroad to design this drone in Nepal. Finding some of the parts was difficult. So, they 3D printed the parts that they couldn’t find in the market. They designed the overall drone with the help of expert electronics engineers, aeronautical engineers, and mechanical engineers. They have used sophisticated software like Fusion 360 and Solidworks in the drone. After preparing the digital design, they created a prototype. To get the final prototype, they tested it more than 5 times and finally came up with the current shape of the drone with a balanced weight and center of gravity.

After assembling was completed, they tested it. As per the team, the testing phase is the hardest part. It includes testing of parts, calibration of parts, tuning for the flight, etc. While testing, the drone gave negative results more than 10 times. In that phase, they also hired some experts to minimize the issues effectively.

Doing all this took them one year of research and development.

They have named this drone as ‘Madhukaa Krishak 1.0’ which is built for the community farmers and commercial farming. The primary objective of this drone is to spray the minerals, liquids, pesticides precisely in the infected field.

The drone has an advanced GPS to balance the flight for accurate landing and take-off. Likewise, it has a remote controller. You can control the drone from upto 8 KM distance and it also supports video information.

Furthermore, it also has an advanced telemetry system to get the live information of flight and controlling from mobile and PC.

What’s more interesting? The same remote system is used to spray the liquids, either manually or automatically. A thermal camera is also integrated with the drone to get the exact location of land that is infected by the pests. The drone will only spray the liquid only where it is needed.

The workflow of the drone

They are currently using a 16000mAh battery in the drone. The battery has 12 cells and a 20C discharge rate. For the 5kg of liquid, it can fly upto 25 mins after one full charge. For the 25 Kg, it will fly a maximum of 10 mins. To charge the battery, they provide imaxB6, a special kind of battery charger.

Ideally, this drone can be controlled from 8KM radius which means it can go upto 8km but when they go up flight cannot be made as near to the ground because there will be no enough air to get enough thrust to fly high. But in the case of horizontal distance, it has a range of 8 Km for manual control and in automation flight, there is no limitation of distance as long as battery back-up.

The current agriculture drone – Madhukaa Krishak 1.0 – is designed to lift a pesticide tank upto 25 KG and spray it in fruit and vegetables. In the fully charged state, the drone has the capacity to lift 60 kg including the body weight and batteries.

Who can use the drone?

Currently, they are targeting Government Organizations such as NARC, Agriculture Co-Operatives, Community, and Commercial farmers. The government has different offices in all districts of Nepal to support the farmers and they can arrange this technology to get the benefits in the initial stages. They are also focusing to create micro-entrepreneurs who can invest to buy this drone, gets training from us and they can give the services to the local farmers. Since this technology is 40 times faster than manual work, both farmers and service providers will be in profit.

“In Nepal, most of the people take drone as a fancy toy and are not aware of its usefulness. Government officials themselves don’t know the technology, and necessity of this technology in Nepal. It is so sad that the Nepal Government has no clear rules for drone flying. Every government department has its own set of rules and if we follow all of them, then it would be better to close the company. One of the reasons for manufacturing Madhukaa Krishak 1.0 is a legal reason. As per the rule of the Civil Aviation Authority of Nepal, we don’t need drone flying permission to fly at the height of 50 feet in private areas and Madhukaa Krishak 1.0 will only fly in private farming land and it does its work at a height of 15 feet max.”

How many drones has Madhukaa Drone Services manufactured?

So far, Madhukaa Drone Services has manufactured 3 drones. A drone costs around 7 lakh rupees. All 3 are already booked by buyers. 5 more are on the process for manufacturing.

Since all the co-founders are engineers and have a passion for technology and innovation, they love this work. In terms of business also, they have seen a huge market potential in Nepal to produce and sell drones.

The team manufacturing drone in Nepal can convey the message that Nepali engineers and companies are enough competitive to manufacture innovative products.

How much money have they invested?

They have already invested more than 50 Lakhs for the development and manufacturing of the drone and organization management.

The team is planning to make this drone much more advanced in terms of functionality and security so that common people will also be able to use it like they use mobile in their daily life. They are also expanding their team to increase their capacity. Other than this product, Madhukaa’s Research and Department is designing a drone for search, rescue and first responder known as Madhukaa SRF 1.0 which will be launched on the upcoming MSTC II organized by Nepal Army.

Trade of Kalimati Vegetable Market Decreased by 50 Percent During Injunction