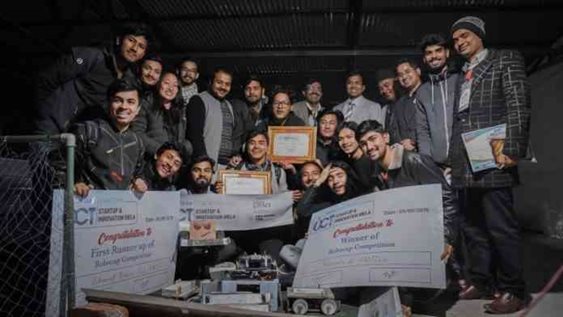 The ICT Startup & Innovation Fair, held from Friday at the Presidential Business School in Kathmandu, concluded on Saturday. More than 50 startup companies put on display various new products during the event. Workshops on numerous topics of Emerging Technologies and conferences on entrepreneurship were also held during the fair.

Robonauts and Kantibir team won the football competition of Robots with Rs. 20,000 cash prize and a shield. Similarly, Advance Robo Club became the first runner-up in the final, which has been presented with Rs. 7,000 cash prize along with certificates. Organizers said that the fair, which has already been held in Biratnagar, Butwal, and Narayangadh, was particularly successful in Kathmandu.

Among the student projects, the Smart Home Project created by the students of NCIT College won the Best Student Project Award. The winners were awarded by Birendra Mishra, Joint Secretary of the Ministry of Communications and Information Technology, and Laxman K.C., President of the Presidential College.

The highlight of the exhibition was the agricultural drones made by the students. A drone prepared by a team, including Shambhu Shivakoti, can irrigate the fields in high efficiency. Similarly, a special exhibition of the Nast’s Nanosatellite was one of the major attractions.