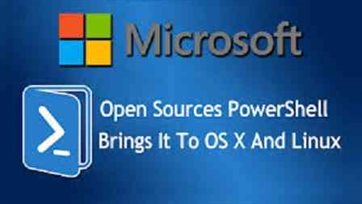 You may be surprised on why Microsoft has made available its open source, Power shell for both Linux and Mac OS X. Soon this article I am going to provide all sorts of information in detail.

Power Sh, ell is a Microsoft’s command-line shell and scripting language. And the Microsoft Company made it available to open the source developer community on GitHub under the permissive MIT License. So Microsoft is making available alpha releases of power shell on Linux (Red Hat, Ubuntu, and CentOS) and Mac OS X on GitHub as a binary release.

Furthermore, Microsoft will be shipping to Nano Server for Windows Server 2016 and make more platforms available in the future on.Net core for both Mac and Linux. Besides your skills on Power Shell are also useful for both window and Linux to work separately and even work together efficiently.

Beside Microsoft noted that the supportive version of windows would be published in the future although the recent release of Power Shell is both alpha-based and community supported.

I guess you have better ideas on strategy and planned of Microsoft to conduct shortly. Even if you want to know more about Microsoft future strategy related to Power Shell, mention your comment.