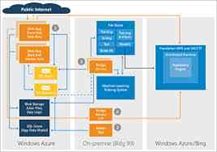 It seems as Google translator apps which can either be in text format been displayed on the screen or you may hear the sounds. This application can have text, visual or may communicate in 27 languages.

This supports various operating systems such as IOS and also runs in the Android platform. This feature is by Microsoft technology companies, so it is named as Microsoft Translator. This supports every phone, tablets and in Apple watch also.

It’s an easy way to translate such as you may speak only and after that, the translator itself translate either in text format and display on your screen and as it speaks also.

We can easily copy and text that word. You can find in Bing the search engine of windows phone mobile operating system as well as on Desktop software of windows 10. By the help of Bing website, Microsoft translation has started their work.

Microsoft has entered in Google territory with their new apps which are proceeding their work for a long time. Microsoft translator can be used in watch also which produce sounds to you with fifty different languages where you get the correct answer to your question which is to translate. Almost your translation get towards the setting of your watch.