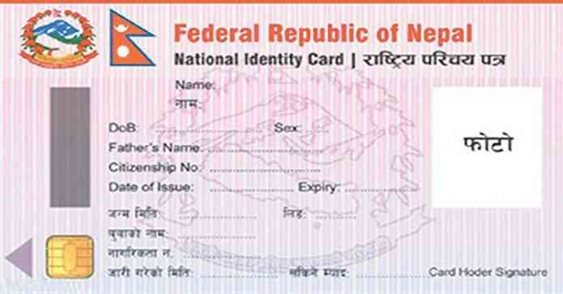 The Government is planning to include full citizen information on the identity card. The National Identification Card and Registration Department has so far completed work on collecting data for 2 million people.

Subash Dhakal, Director of the National Identity Card and Registration Department, said that the Department has begun the work of buying cards with a proposal to give cards to people whose data has been collected.

According to Dhakal, the work on data collection and the national identity card center system has been completed.

“So far, data on 1.8 to 2 million people have been obtained,” he said. “Now they need a security card to make the card available, so an international tender was called on Thursday.”

The Act stipulates that smart cards with chips will be issued. He said, “You have not gone beyond the rules now.” But now we’re looking for a business that can supply chips to the cards. The business will supply the card only.

In the same way, the Department will retain the required details on the card and make it available to residents. The department has already prepared the necessary systems to keep the information.

The card is going to have a pre-built security feature. In which you must supply the card with security features such as history, UV image, an optically variable image on the back of the card. Such cards have been claimed on average by Rs 13 million.

Currently, the number of qualifying Nepalis to vote is roughly 13 million. That’s why the number of the card was requested, Dhakal said.

According to Dhakal, there is no Nepalese company providing the card with the security features of the standard we requested. However, Nepalese companies will also be eligible to join. There is a clause in this project that JV, i.e. an intermediary company, is not allowed.

“This is because of security. It is sensitive from a security point of view, as it has the information of the citizen. One cannot give the project to another, the other to another. This provision has been made, as the company will be responsible for bringing it directly from the company,’ he said.

The project cost is expected to be around Rs 1 billion.