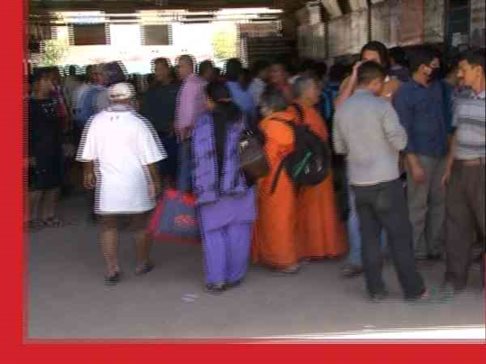 More People Leaving Kathmandu After the Quake of Tuesday

On Baisakh 12, 2072 (April 25, 2015) a 7.8 magnitude earthquake with its epicenter in the Gorkha district hit Nepal. This earthquake filled people with fear, destroying their homes, historical monuments and many infrastructures. Due to the frequent aftershocks and uncertain safety of the buildings, many people chose to stay out in the tents and open areas. It has been tough to live in tents as the continuous rain has been creating a lot of difficulties for the victims. Kathmandu valley also sustained a lot of damage due to quake.

Due to the unstable and dangerous living situation, many people have chosen to leave Kathmandu for a certain period of time. However, after the high impact aftershock of Tuesday, the number of people leaving Kathmandu has increased drastically. Even those people who had left Kathmandu after the quake on Baisakh 12 and were returning back after the situation was turning back to normal have been reported to have returned back to their previous destinations.

Approximately 1 lakh people have been reported to leave Kathmandu as said by the Nepal transportation association. According to the association, people have been traveling with their households’items which has created a mess in the management of vehicles. Similarly, it has been very difficult to manage the availability of vehicles due to the huge number of passengers.