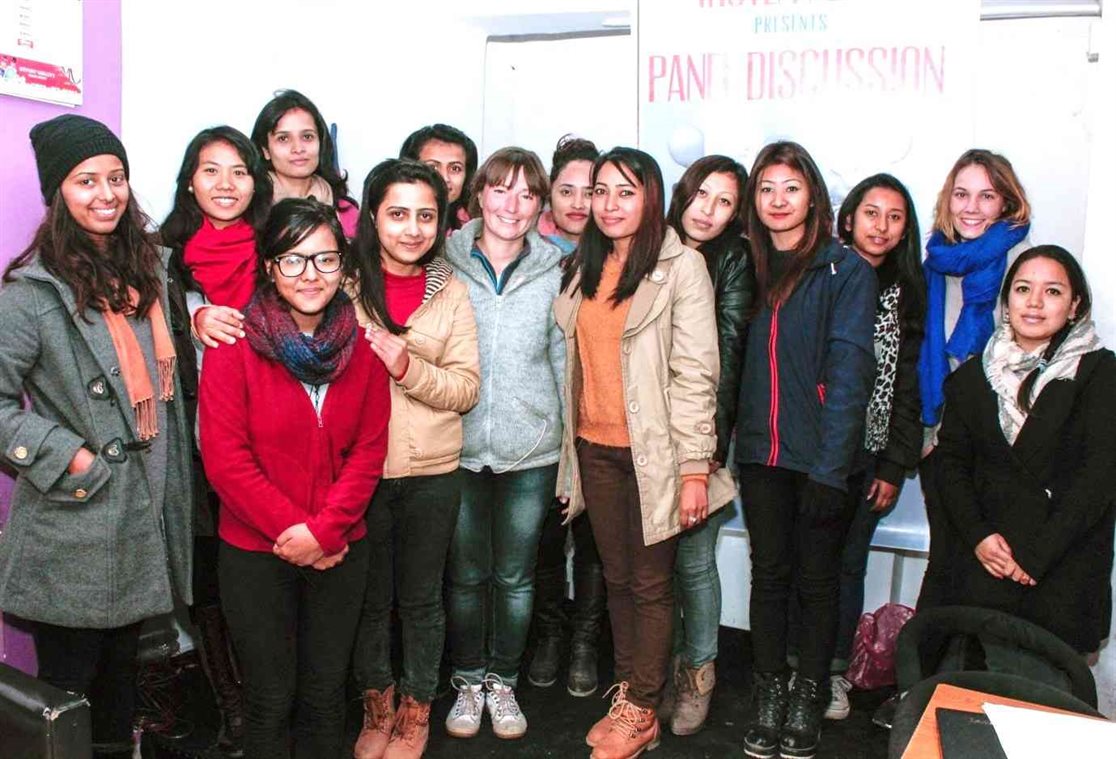 The panel discussion that Women in STEM Nepal (WiSTEM Nepal) has conducted the panel discussion with Women Technologist and Women Entrepreneurs who are building their successful career, innovative ideas, companies, supporting other female entrepreneurs along the way on STEM careers in Nepal and across the world. The fact that the STEM (Science, Technology, Engineering & Mathematics) field has the considerable gender gap over women in the world as women pursuing STEM subjects and Technology is only 24% in the world. Hence WiSTEM Nepal is conducting many sessions to encourage more women into STEM Fields that include the Mentoring programs, Training programs, and Leadership & Entrepreneurship programs. Panel Discussion series is one of the mentoring programs. The discussion was targeted to have an open interaction between panelists, guests and WiSTEM Members.

Panelists at the Panel Discussion on “How to bring more women into the field of technology” organized by WISTEM Nepal.

Panelist from France Ms. Ludwine Probst, a data engineer, primarily working on data processing & analysis, doing her research works here at Nepal, Asia Ludwine gave insight into the challenges she faced as she studied Mathematics in France but later found her calling in Software. She is in Nepal to explore the challenges faced by women who chose a career in IT.

While next panelist from Ms. Sweden, Yuliya Zhuk, a geologist by profession, who is currently conducting her research on the evolution of Central Nepal believes that STEM needs more women to come up with confidence, attitude and zeal to learn the STEM subjects, she says “the problems a woman who wants to join a scientific discipline faces in Sweden, multiply it by 10, and that’s how hard it is in Nepal.”

And hence Panelist Chhaya KC, Native Entrepreneur, Business developer and Customer Relationship Manager at Edushala, Nepal imparted the message that dedication, hard work, and passion took a person towards success and shared her part of the story. She represented Nepal and inspired the female technologists present to be stubborn about what they want and not give in to society´s idea of what a woman should do and shouldn´t do.

Focused on the root causes of the gender gap in STEM fields, the discussion was joined by many guests.

Guests kept raised questions on the subject, Punit Jajodia, Co-Founder at Parewa Labs says “ Though the women can do most of the things, why they hardly participate?”
Where does this begin? 95% of young girls are interested in Science & Mathematics subjects during their primary and secondary schools. The number decreases to 35%-25% when they reach to High schools. Why? The possible reasons might be they lack the right mentor who can train and mentor them well on mathematics, science or STEM subjects or maybe whenever they perform poorly in STEM subjects their mentor, parents didn’t support them well, and hence they might felt that they do not belong here.
Ayush Shrestha, Co-Founder at Lishn App, adds proper guidance and mentoring is required from the very early age to the young girls as they are very new to these fields.

Moving on to undergraduate girls, few of them made their presence on the discussion program.
‘If you are passionate enough for Technology, then you will go find its details from every single clue ” says Nhasala Joshi, President, Women Leaders In Technology.

Lasang Jimba Tamang, Co-Founder at Kulcha PVT.LTD was curious to know “Why we have few women as the developer in ICT fields?” He has been hiring women in QA and designing; none showed as Developer. They might still be bounded by the limitations regarding the timings as a developer has to dedicate her time a lot. Or sometimes how a woman perceives things might be different and that’s why a woman requires a women mentor to motivate her in all possible ways. Hence women need a women Role-Models, Women in STEM Nepal is contributing to encourage and train these young interested girls of age group (8-29) years in all possible ways. The discussion ended up with the appropriate solutions to target from the root-causes, going back to High Schools, Primary and Secondary Schools and training the young girls(8-15) years on Computer programs, office packages, and Raspberry Pi Projects to create their interest from a very early age. Classroom cultures can be transformed into something digital way so that they make the young girls more interactive as well as knowledgeable.
While Mentoring, Meetups, training classes, Entrepreneurial skills training are provided to the age group of (15-29)years to decrease the difference in STEM Fields shortly.

The Top 5 for ICT Awards 2020 Have Been Selected