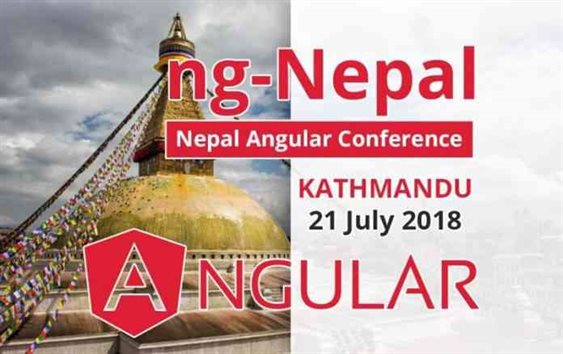 For the 1st  time in Nepal, AspNet community in association with Nepal Mentor is partnering with ng-Global and ng-India to host an ANGULAR CONFERENCE on July 21, 2018, at the capital, Hotel Yellow Pagoda, Kantipath. This event can be life-changing for the interested developers using Angular.

The angular conference is a great way to discover new approaches for designing applications on the web. And for this event, they will see the following things:

Angular is a framework of Javascript that makes the creation of client-side web apps, so running in the browser will be more comfortable and more fun. The TypeScript-based open-source front-end application platform (web) led by the Competent Angular Team at Google and by a community of individual personnel and corporations. Angular is a complete rewrite from the group that built AngularJS.

Angular JS is a single leading framework for building JavaScript massive single page based web applications. Single page apps load the entire content of the site within a page. One big difference between Angular based sites and the traditional one is that Angular expects the browser to build the page.

With AngularJS, The designers can use HyperText Markup Language (HTML)  as the template language, and This allows for the extension of HTML’s rules to convey the different application’s side effortlessly. Angular makes most of the code you would otherwise have to write completely redundant.

The speakers for the event will be as following:

Shiva Prasad Koirala
Co-founder of Brainoorja Creations and a corporate trainer imparting knowledge on Node JS, Angular, ionic2, and Bot framework. He is the founder of www.questpond.com which is an E-Learning platform for .NET developers.

Developer Evangelist for Infragistics. He is eight times Microsoft MVP and well-respected Developer Advocate in Country of India. He is the author of Nine Hundred Plus Blog Posts and has hosted 60 free workshops on various topics like JavaScript, Angular, WCF, ASP.NET MVC, C#, Azure, etc.

Co-founder of Brainoorja Creations and a corporate trainer imparting knowledge on various cutting-edge technologies, such as – Node JS, Angular, ionic2, and Bot framework. Along with these four speakers, there will be some more orators in the event which has been not fixed yet. The organizers said they would confirm the remaining speakers very soon. Here are the lists of some of the renowned web applications, which are powered with the flexible and robust Angular JS framework.

Altexsoft, one of the leading technology & solution consulting company, has mentioned some of the advantages of Angulars JS, which are stated below.

AngularJS was built with Model-View-Controller architecture. And the framework synchronized the Model and the View. As the data in the Model changes, the View does too. Two-way data binding allowed engineers to reduce development time as it didn’t require writing additional code to provide continual View and Model synchronization.

Dependencies define how different pieces of code interact with each other and how the changes in one component impact the other ones. Usually, dependencies are directly represented themselves. So, that every change of independence requires changing parts as well. With AngularJS, you could use injectors that defined dependencies as external elements decoupling components from their addictions. Dependency injection made components more reusable, easier to manage and test.

Right from the beginning, AngularJS became extremely popular among engineers. An active community provided enough training materials, discussions, and third-party tools to embark on using AngularJS as well as find a solution to nearly every arising issue.

About the Local Organizers (Nepal)

AspNetCommunity is a User Group of .NET professional from all around the globe, with some founding and active members from Nepal; with the mission is to create an ecosystem to share the knowledge among the professional fraternity for technological advancement, and especially to prove Nepal’s strength of providing world-class technology solutions to the entire world.

Nepal Mentor is Individual Development organization formed in 2018 by the HR and Tech professionals. The organization focuses on universities graduates for learning and development through Training, Development, and Mentorship; and corporate institutions and startups for management and consulting.

Why CAN CommTech 2017 ? Everything You Must Know