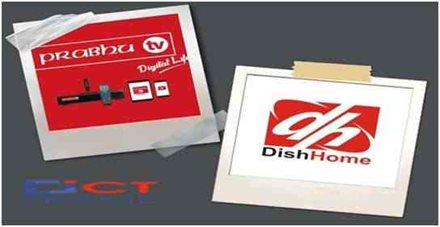 PRABHU TV is a startup enterprise licensed by the government of Nepal. It is promoted by Prabhu Group to operate the 2nd generation Digital Video Broadcasting (DVB-T2).

DishHome is a DTH service provider in Nepal. Dish Media Network Ltd. operates it. It was formed in 2010 after a merger between two DTH providers, the Home TV and Dish Nepal.

DishHome signed an agreement for Prabhu TV and Internet merge with Dish Media Network about a month ago. So finally, the two company are now merged.

After Dishhome bought Prabhu TV and internet, it will now be branded under the name of Dishhome.

The migration work is underway after Dishhome bought Prabhu TV and internet.

Even though Prabhu IP TV came under Dishhome, it will be sold under the brand of Prabhu IP TV for 1-2 months now.

The General Manager of DishHome, Ramesh Sapkota, informed that 50 percent of customers of Prabhu Internet have migrated to Dishhome Fiber Net. Migration was delayed due to lockdown. Migration can be completed 10 days a week after the lockdown. Even now, the companies are doing 1-2 migrations a day.

At present, Prabhu has about 20,000 customers of IP TV and Internet.

Prabhu Group chairperson Devi Prakash Bhattachan has also invested in Dish Home. He said that it could be considered natural as there is an investment in Bhattachan’s dish home.

With Prabhu TV and internet purchase by Dishhome, the possibility of expanding its service across the country has increased.

After the merger, 150,000 television subscribers and 30,000 internet users have arrived, and the company is preparing to provide services at additional concessional rates.

The Biggest Re-Branding Campaign In Nepal