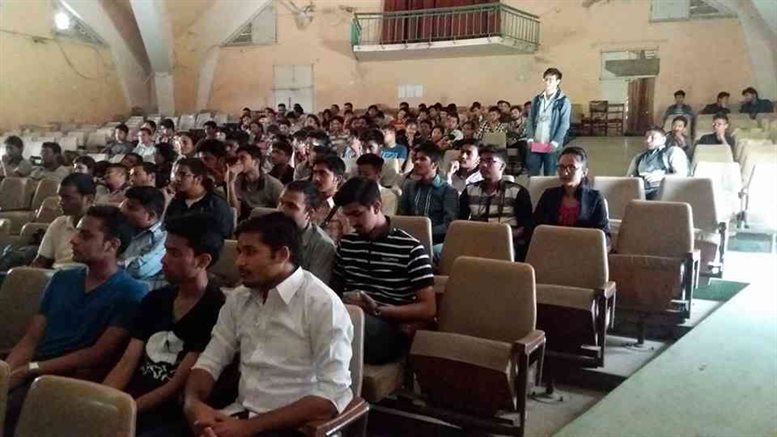 The first day of the 5th University-Industry Tie Up organized by the CSIT Association of Nepal has been completed at the TU Auditorium Hall, Kirtipur, in the Educational Block. The autonomous, non-profitable, non-governmental, non-political and service-oriented social organization had already organized four UI tie-ups in the past.

University-Industry Tie Up is an event that is organized by the CSITAN annually for bridging the gap between University and the IT Industry along with students.

The event was inaugurated by Prof. Dr. Subarna Shakya, from the syllabus development committee and was hosted by Shristi Shakya, the treasurer of CSIT Association of Nepal welcomed all the guests and audiences in the event with her speech.

The panelists in the panel discussion were Prof Dr. Subarna Shakya (Syllabus development committee) responsible for the development, revision & upgrade of syllabus, Mr. Suman Lal Shrestha (Assistant Dean Exam Department), who was there for answering all queries related to Exam, back paper, Result and related schedules, Jagadis Sir for answering questions regarding Degrading quality of CSIT, Dilli Prasad Sharma (CCON Representative) for the queries about variance in Exam fees and University service charges in private colleges of payments under stupid headings, Representative from DWIT as an Industry Representative who was there to explain TU what the industry wants in a student and how TU is willing to train them.

The panel discussion heated the hall with students asking the questions regarding their problems with the course and complaints with the university. The panelists as well fairly dealt with their issues. The majority of the claims of the students regarded the untimely exam and result system. Others were regarding not getting the equivalent degree as that of engineering and selection in the ‘Lok Sewa.’ Only the answer for the latter one from the officials was able to satisfy the students.

Many other problems such as misbehaving of students in the examination hall, not being able to arrange transfers from private to government colleges, deteriorated practical labs, overrated fees of private colleges, massive difference in fee structures in various colleges, etc. were addressed in the discussion.

Different topics such as modification of the course, preparing students for the growing industrial market globally, their limitations and extents were discussed as well. The students put forward their questions on what type of interns are generally seek for, and the panelists addressed their queries well.

A lot of improvement is to be done, and students don’t seem much satisfied with the answers. They are expecting for a positive change soon, though and are enthusiastic for the panel discussion with the industrialists tomorrow.