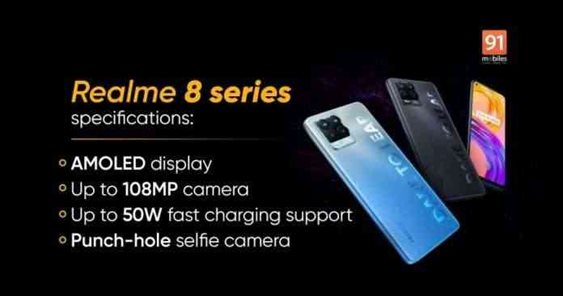 Another Chinese smartphone company Realme has announced to launch of the Realme 8 Series. Realme 8 and 8 Pro are on the Indian market from 24th March.

Last year, the company has launched Realme 7 and 7 Pro in September, is now about to launch an updated version of the same as the 8 Series. Its pre-order has already begun in India.

Realme 8 Pro will have a 108-megapixel Infinity camera and Realme 8 will have a 64-inch quad camera setup.

RealMe 8 Pro will have a 108-megapixel quad camera set up according to the various information that has been released so far. Similarly, support for quick charging of 50 watts will be available.

The Realm 8 Pro, which is supposed to come with Qualcomm Snapdragon 732G chipset, is estimated to have a storage capacity of 128GB.

You may like this: OPPO Teases about Upcoming Flagship Under F-series

Similarly, Realme 8 will be equipped with a 64-megapixel quad camera and is expected to have a Super AMOLED show. In addition, the Qualcomm Snapdragon 720G chipset and RAM will have an internal capacity of 8GB and 128GB, respectively, like the 8 Pro chipset.

In addition, the company is also expected to launch the 5G variant of the 8 Pro.

You may like this: Samsung Nepal Launches Galaxy A12 with True 48MP Quad Camera

OPPO Speeds Up the Process of Building a Virtual World with...