Hack-a-week is one of the pre-programs being organized by LOCUS as a means to bring together developers, programmers, and tech-enthusiasts and stimulate them to get involved in a competitive and innovative challenge. Hack-a-week aspires to become a hub to amass a large number of enthusiasts coming from different disciplines working together to come up with impactful solutions in raging issues.

It is a week-long event in which some innovative participants engage in teams of collaboration to fashion out some product in forms of software development, business modeling and ambitious marketing campaign, which revolves around one of the three themes.
The themes for this year are:

HACK-A-WEEK 2019 THEMES
Tourism and Agriculture
The tourism industry of Nepal can serve as an important client for the agriculture sector, especially to small farmers. Agriculture products & processes that are 2nd nature to a domestic market are often exotic to international tourists. With a thorough survey of what the agriculture industry can supply, high-potential products and services that will capture tourist dollars can be created. Bringing the tourism & agriculture industries together to talk about partnerships, production and further collaboration set the stage for improved sales linkages.

Nepal’s economy is primarily based on agriculture and tourism. The agriculture sector, contributing to more than one-third of Gross Domestic Product (GDP) and two-thirds of the Country’s labor force is central to the livelihood of every Nepalese people. Also, Tourism is the other leading candidate contributing to 7.8 % of the country’s GDP.

Sadly, however, a substantial percentage of the population lives below the poverty line with the country’s per capita income sitting at around $720.40 in 2017 because of inadequate performance of these two sectors failing to meet the increasing demands of the growing population in the country.  Benefit realization of agriculture and tourism in the country’s overall development, the government of Nepal including several NGO’s and INGO’s have been actively participating to mitigate the effect especially using innovative technologies.

Massive investment has been made to discover promising technologies, support partnerships and ultimately bring robust tools and practices for farmers and the tourism industry in all stages of the supply chain. Different technological fests are being organized with the aim to build projects that promote agriculture and tourism which later on with the joint venture of some investor have turned into a successful product running in different part of Nepal such as Karnali. Use of ICT in the development of Agriculture and Tourism can be a considerable impact on increasing income, alleviate poverty and uplift the living standard of Nepalese people.
Nepal has huge potential in agro-tourism regarding suitable climate, diversified landscape, labor forces, and the demand of agro products and flow of tourist. It has vast potential to generate large-scale employment, additional market and income sources to the rural households and traditional farmers.
Disaster Response
Emergency disaster response encompasses a range of measures aimed at protecting life, property & coping with the social disruption that disasters produce. Emergency response activities can be categorized usefully as expedient mitigation actions. Pre-Scenarios of catastrophe is likely to be: every year the same accident claims hundreds of lives and people are unaware of the unprecedented risks they can run into.

Whereas, Post-Scenarios are a haphazard collection of donation and relief aid and relief aid not reaching in needy time. Due to lack of analytical data for planning and preparation, inability to locate disaster-prone areas correctly by volunteers, difficulty in finding trusted donation collectors and no center channel to keep track of distributed relief material, Organizers are unable to reach out disaster-prone areas for alert and help on time.

In the past few years, several INGO’s, NGOs and other environmental organization have been actively working in the projects related to effective disaster response. The International Centre for Integrated Mountain Development (ICIMOD), regional intergovernmental learning and knowledge sharing center, has been doing remarkable work in developing efficient disaster response system in Nepal.

It is using remote sensing (RS) and geographic information system (GIS) to map and monitor glaciers in the Hindu Kush Himalaya (HKH). These mappings provide information on the status of glaciers and decadal changes. Continual mapping and monitoring of glaciers will give answers to how climate change is affecting the glaciers of the HKH and also enable experts to identify potential glacial lake outburst flood risks. Further, such mapping and monitoring will also provide evidence for policymakers in the region to understand their fresh water reserves and to enhance their water-related hazard and risk reduction planning.

With the use of ICT, several disaster predictive models can be proposed to warn people before such a disaster takes place including the system that can locate and deliver immediate help to disaster-prone areas.

The use of entertainment technology has increased tremendously at work, in school or at home and this technology have caused a profound impact on human behavior. With the growth of different social media platforms like Facebook, Twitter, LinkedIn, and Instagram the world is now much smaller. They are open to many people all around the world as communication now has become much more comfortable than the past.

If we look at the present scenario throughout the globe, we found people busy and stressed in their day to day activities which might lead to several mental disorders like anxiety, depression, loneliness and so on. Thus, games and entertainment could be great savior refreshing humans. Also, entertainment media can also become a huge source of valuable information and message conveyer as they cover broad range of products and services like movie, music, TV, VCR, VOD, computer game, game console, video arcade, game blending machine, internet, intelligent toys, simulation, VR and upcoming service robots. Investment in this category is found to be profitable from a business point of view. 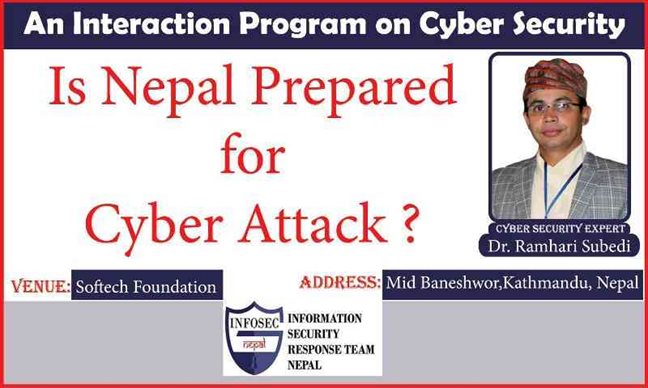 Is Nepal Prepared for Cyber Attack ?