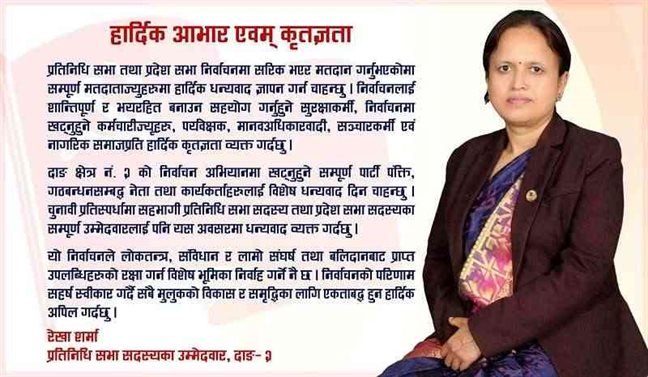 Mangshir’s 4th representative assembly elections interest is shown in various regions among which Dang is one of them. Chairman of CPN UML KP Sharma’s confident Shankar and Prachanda’s confidant Rekha’s competition has been an interesting subject to talk on.

8 Mnagshir, Kathmandu: Before leaving Kathamndu to compete for house of representative’s election Rekha Sharma said,’ At the moment I remember Diwakar sir (Post Bahadur Bogati). He used to say we have provided you with opportunities its your job to fight for it.’

This topic resembles year 2057. The information about making Rekha central member of the party was given by Bogati himself. During that time to reach central committee it was big political achievement.

After being central member Rekha said,’ Can i take this responsibility? Bogati replied- ‘work hard for it.’

In 2079 parliament government election purbasabhamukh Krishna Bahadur Mahara was not given ticket whereas Rekha received it through Maoists. It was her responsibility to win against amale candidate Shankar Pokhrel.

After a tough fight with amale general secretary Pokharel  she won with 197 vote difference.From the beginning of the counting till the end she didn’y let Shankar to take over her.

During the candidate recommendation in Dang 2 first name was Mahara. Second Rekha and third Nirmal Acharya. But Maoists chairman Prachanda suggested Mahara to not to fight election from there.

Chairman requested Mahara to send recommendation from region no 1. Party didn’t obey his instruction. It was proven that Rekha was much capable than Mahara.

Prachanda suggested Rekha to prepare her election in Dang. In that moment Rekha said to online khabar,’ At the moment I remember Diwakar sir (Post Bahadur Bogati). He used to say we have provided you with opportunities its your job to fight for it.’Finally: In elections competition she passed it.

Before this in 2070 for the first time she became proportionate  constitution chairman and again in 2074 she beacme chairman of parliament from same proportional qouta.

In Dang 2 Maoists is the third force. Amale stands first and Congress second. In local election after amale won against Congress and maoists their self confidence has boosted up.In Dang 2 comparing the votes received by ward chairman was less than amale’s vote 33 thousand 793. Votes were something like this in second place congress 23 thousand 301 and in third place maoists 10 thousand 478.

Rekha Sharma’s election confidant maoists representative leader Hemraj Sharma says,’ we were sure about our winning, plus was aware about saving coalition votes.’ Hemraj is the one who lost against amale candidate in gorahahi. Even after colab with congress the votes were not received from congress which was dissapointing for maoists representatives.But after seeing Rekha as election candidate the congress team were happy.

It was a mutual collaboration of Dang region no 2 representative maoists and congress. When Rekha won assembly representative towards province assembly in Dang 2 Raju Khanal and Prachanda Bikram Neupane won.

Khanal said,’In local election there was weakness from us. In this election we didn’t leave any page unturned so we made it.’

Rekha who was born in 2026 ashoj 9 in ghorahi rjhena started her political journey through kranti revolutionary. She passed her graduation from Mahendra bahumukhi Campus and also became vice president of Akhil revolutionary.

In 2072 Rekha worked as a normal administrative leader. While making of the constitution she made sure to keep women’s place safe she said.

Following that in 2074 as a representative of parliament she worked hard and also built a health building in ghorarahi.

She belongs one of those women who used to go every day to the office while making of constitutions and representatives.

Torture in the custody of the army

In 2078 she was caught with her husband Krishna Dhoj Khadka in chabahil. In Kathmandu Two bureau were present. The central incharge of bureau was Krishna Dhoj whereas Rekha was incharge of the organization bureau.

They used to work under the guidance of Badal. While planning for work army caught them. From there both of them were taken to Lalitpur rajdal. They gave different torture to rekha and her husband. Till now there is scar of knife.

They used to cover my nose and make me drink garbage water, many times i have fainted too due to torture. While waking up after being fainted my body would have different clothes. During those 1 year i experienced the worst phase of my life.’ After the agreement between the government and Maoists in 2079, they were released from jail. After that, they worked for a party. Krishna Dhoj is also an arthamantri in the Lumbini region.