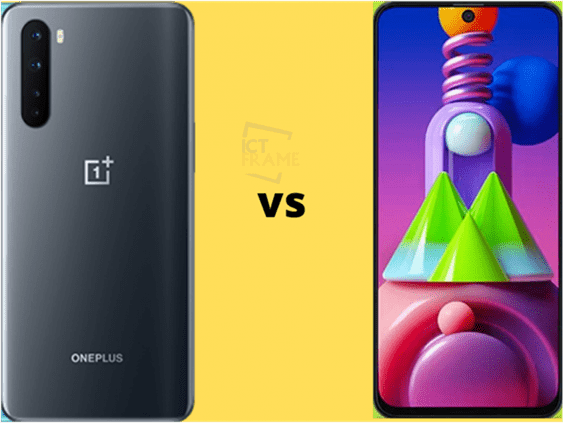 With Samsung coming up with Galaxy M51 and One Plus coming with Nord, the market competition has gotten tough! Although the buzz surrounding OnePlus Nord is something else, Samsung’s M51 is also very there in the market with promising features! Let’s compare both of them in this article. The final verdict is always yours!

When it comes to displaying, both the phones are almost similar to Samsung M51 having a 6.7-inch sAMOLED FHD + screen and Nord having a 6.4 inch FHD+ Fluid AMOLED screen.

Likewise, Nord also has a vertically aligned quad-core camera with 48 MP primary, 8 MP ultra-wide sensor, 5 MP depth sensor, and 2 MP macro lens. Meanwhile, for selfies, the front-facing camera has the same megapixels for both the phones i.e 32  MP. Whereas with Nord you get an additional secondary front camera with 8 MP.

Samsung Galaxy M51 offers a whooping battery life with 7000 mAh with reverse charging whereas Nord is lagging far behind with just a 4115 mAh battery. So, if you are aiming for better battery life, go for Samsung! Similarly, both the devices here support fast charging in their specifications. Battery-wise Samsung Galaxy M51 is the clear winner with a great margin!

Both phones have great software! Galaxy M51’s ONeUI and Nord’s Oxygen OS are the best of the best in the market. So, in this department, it will not cause a great difference whichever you choose. Both are as good!

Performance-wise, Nord’s Snapdragon 765G is far powerful compared to Galaxy M51’s 730G. If you are a gamer, you should opt for Nord. But that doesn’t mean M51 is that far behind.

Currently, only the 8/128 variant has launched in Nepal with NRS. 53,999. Other versions are expected to launch soon.

Price-wise Samsung Galaxy M51 is so much lighter to your pocket! So if you are tight in your budget, you canopy for the Galaxy.

If you are a mobile gamer, go for OnePlus Nord because of its better processor. Likewise, Nord has a dual front-facing camera which is good for selfies.

Meanwhile, Samsung Galaxy M51 has a massive battery with a bigger display screen. Similarly, its base storage is 128 GB compared to Nord’s 6 GB. You will have to pay extra bucks for the storage in Nord. Price-wise also, Galaxy M51 is far lighter.