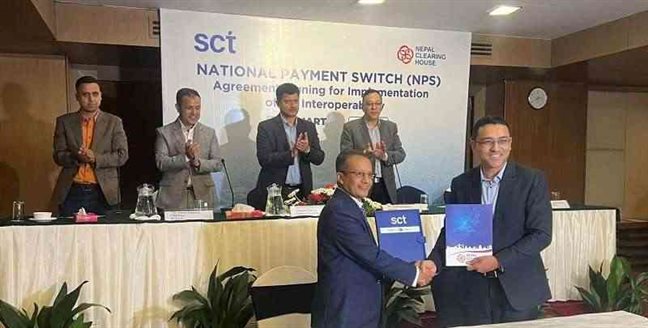 Smart Choice Technologies Ltd. and Nepal Clearing House Ltd. are partners for the implementation of internetwork interoperability between NepalPay QR and the Smart QR network.

An official agreement was entered between the companies in a program today.

While the customers will be able to scan any of the QRs for payment, the member BFIs & PSPs will not require multiple acquiring of the single merchant; and will ease payment reconciliation for the merchants also. There are more than 70,000 merchants acquired in NEPALPAY QR, while Smart QR has more than 160,000 merchants in the market.

NEPALPAY QR has been implemented by NCHL as per the NepalQR standards published by NRB and as part of the National Payment Switch. It works as an independent QR scheme and allows QR interoperability at the merchant level and network level. NPS has already been subscribed by over 57 institutions including 27 commercial banks, 5 development banks, 12 finance companies, and 13 payment service providers.

It has been offering diversified payment services and platforms to most commercial banks, development banks, PSP (Payment Service Provider), and other financial institutions in Nepal. It is also providing major digital banking services including SCT UPI Debit Card, Smart QR, Fast Banking, nPay and is a major player in Nepal in driving digital payments.