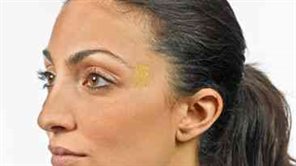 You may have thought about all those Techs that are changing every day so that they can be ease to humans and their daily routines.

What you may not have thought about is they could come in any form that we could not imagine. Could you believe that a patch of gold on your temple could read your inner thoughts and feeling?

It’s like it has changed your body itself into a Computer. This tech is named as bio stamp developed by Professor John-Roger.

This Tech which is a flexible and miniature sensor and attached to the temple could track the brainwaves signal in real time and transmit them as messages.

This has not only brought revolution in the field of tech but also in the medical area as this process of tracking brainwaves was quite tricky in the past whereas such technology can create a new era for a therapeutic approach.

They have been giving more focus on the medical applications of the tech whereas it can have greater use and value shortly. As this wearable tech is improving day by day, the medical field is quite benefited because of the ease of application.

This Tech can pick the signal anytime and anywhere, and it is made to collect messages more accurately. The brain is just the latest target as it has also been used for different parts to monitor heartbeat, temperature, and another critical signal.

Different companies like Reebok, L’Oreal have also been using them for improving their products. Even the US military has adapted it so that they can know the condition of their soldiers.

These types of devices are also known as biocompatible devices as they perform their actions with ease and even acting as part of the body itself.

These devices are also being tested inside the body and shortly will be able to perform tasks that are generally performed by the medical department. As they have a high risk, the tests have just been limited on the rodents.