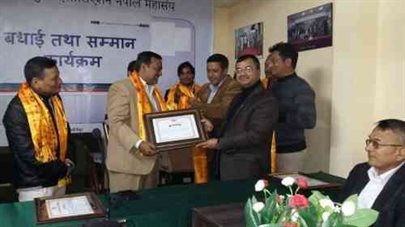 Computer Association of Nepal Federation (CAN Federation) has a variety of strong achieving personalities in the organization; thus, they organized a program to respect and congratulate the fellow achievers.

Similarly, the Internet Society’s Advisory Board recently elected Advocate Mr. BaburamAryal for the Asia Pacific region, and the Assurance of Computer was honored to Dr. Pawan Sharma who recently got his P.H.D, and the CAN Federation President Er. Binod Dhakal was also honored by commendations.

Speaking amidst all the awardees in the event, Mr. Suman Lal Pradhan, President of ISPAN while referring to the Information Technology industry said that, in the coming days we must all coordinate with CAN Federation Chairman Er. Binod Dhakal to improve and develop the ICT sector. Mr. Pradhan also acknowledged all of the other members and organization personnel as respected personalities in the ICT field.

Computer Association of Nepal (CAN) was established in the year 1992 and later formally registered as CAN Federation in the year 2015. The organization is formed with the involvement of several professionals, specialists, institutions, and organization in the ICT field of Nepal. CAN is a non-political, nonpartisan, nonprofitable and service-oriented sector in ICT.