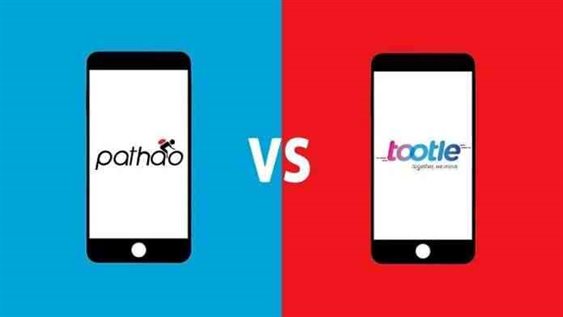 Ashish Rana of Bhaisepati previously used to share rides via the sharing app Tootle, and he says that he earned well. As the number of riders slowly increased, it was challenging to cover up with the passenger’s request. Why is tootle slipping behind pathao?

The problem with Tootle’s application is that it sends a ride request to all active riders. The riders have a competition running between the passengers to collect them. When the internet connection is weak, some riders don’t get the chance to collect passengers. Ashish, who left Tootle after not being able to stay as active as he thought, said, “The technology of Pathao is easy.”

According to him, Pathao’s app only sends notifications to the nearest passenger. When a customer sends a ride request from any place, only the riders nearby them are informed. This reduces the time taken for the riders to reach the passengers. On the other hand, even the distant riders don’t need to waste time covering the passenger. Both the rider and the customer are at ease.

“We were comfortable with the distant rider being unable to pick up the nearest rider,” Ashish said.

Raju Shrestha of Lazimpat is active in both Tootle and Pathao. He is a shopkeeper by profession and shares rides during his free time. Initially, Raju was working with Tootle, but now he is tied to both the companies. He also finds Pathao more comfortable.

Many riders, just like Ashish and Raju, are more comfortable in Pathao than Tootle. In a company that has many riders and is easy to find, customers naturally go there. The direct benefit of goes to Pathao, while motorists have more to gain from the Tootle than the Pathao financially.

When the concept of ‘ride-sharing’ started in Nepal, Pathao’s wasn’t heard of. During the last week of Poush, traffic police took control of several Tootle and Pathao riders. They said that a private vehicle with a red number plate couldn’t provide transportation services. Tootle was popular among the youth of Kathmandu at the time, and Pathao was looking to make a mark.

Suddenly, Pathao, along with Tootle, became acquainted after the accusation. Names of companies came on both social media and the media. After the direction of Prime Minister KP Oli, the two companies could run smoothly. The service providers from both companies increased. So far, there have been downloads of 2 lakh’ passenger app’ of Tootle and about 15,000 ‘rider app.’ Likewise, Sixit Bhatta, founder of Tootle, says that they have about 5,000 rides daily.

Pathao hasn’t given riders much commission. There is a provision to collect Rs. 30 when the passengers get on the motorbike and an additional Rs. 15 is charged per kilometer as well. The rider receives 80 percent of the customer’s payment. It has offered bonuses and commissions to passengers at different times. The riders can only carry passengers within two and a half kilometers, so their average ‘pickup time’ is 4 minutes, says Basnayat.

Tootle provides a lot of benefits to the riders. Customers will have to pay Rs. 60 for the first 3 km, Rs 18 per kilometer for 3-6 km and Rs 25 per kilometer for over 6km ride. The rider can receive up to 96 percent of a customer’s money. Tootle can be used to pick up passengers from anywhere in Kathmandu.

Basnayat says that the market is expanding because of their modern and smart app, which facilitates both riders and passengers.

Although Bhatta, the founder of Tootle, offers similar services, he complaints that the state could not provide startup companies with an investment environment, so they’ve not been able to move forward as expected.

Bhatta said, ‘Billions of dollars have been invested in Pathao. It has been challenging to bring such an investment into Tootle. When investing in big companies, knowledge, and technology also come together. If the investment comes, we can bring in the staff and technology that Uber is working on. But the government policy has stopped a lot of work. ‘

The backbone of these ride-sharing companies is their application. Pathao rider Ashish says it will be easier for both the driver and the customer if the apps work well. The customer will switch where quick and easy service is available.

Pathao says they’re working a lot in digital marketing. Basnayat said, ‘Our goal is to ensure that customers get fast and secure service. We train the rider and use rides in good condition. We deal with customer complaints as fast as possible, but our riders don’t receive a lot of commissions, but our network is large and organized. With a lot of rides, you earn a lot.’

Ridesharing service is new in Nepal. So far, only Tootle and Pathao are in the market. This service has also employed many youths, facilitating clients, and supporting the government. In a market where only two companies are competing, there is enough room for both. However, the question of who thrives in such a market depends on the technology they use.