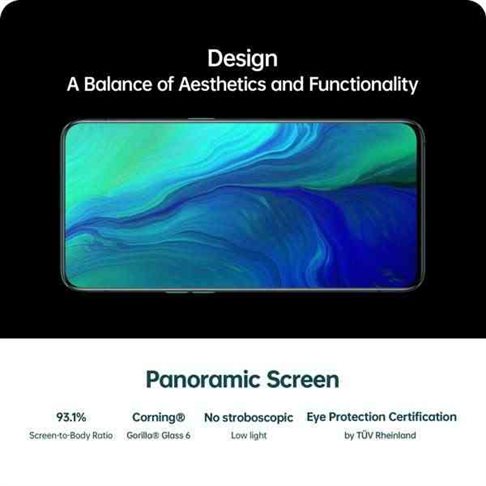 OPPO has recently announced to unveil its new Reno range of smartphones in Nepal. The new Reno 10x Zoom Edition takes the smartphones’ zoom capabilities to a whole new level. But, that’s not the only thing that the new OPPO Reno is all about. Therefore, through this article, let’s take a closer look at the top five features of Reno 10x Zoom Edition.

The 10x Optical Zoom-capable sensor is one of the best features of the Reno smartphone. Ever since OPPO showcased this tech at this year’s MWC, we’ve been looking forward to seeing the tech in a commercial offering. This is the highest optical zoom ever available on a smartphone, which is made possible thanks to the periscope style design of the sensor. The phone has a 13-megapixel f/3.0 telephoto sensor with a focal length of 160mm. The sensor also features hybrid-OIS to help shoot blur-free photos and videos.

Snapdragon 855 SoC under the hood

Another impressive feature on the OPPO Reno 10x Zoom Edition is the inclusion of the Snapdragon 855 chipset. This is the latest chipset from Qualcomm, and is quite powerful and efficient and is paired with 8GB of RAM and 256GB of storage onboard. The Snapdragon 855 will be more than enough to power all the games and includes plenty of AI features. The chipset will also support 5G in a future variant of the phone.

Apart from the Snapdragon 855 SoC, the smartphone also gets other hardware features such as a 3.5mm headphone socket, NFC, triple-microphones, and dual-frequency GPS. The phone also has Game Boost 2.0 and supports Dolby Atmos. It also features a 4,065mAh battery, which supports VOOC 3.0 fast charging, which is claimed to be 23 percent faster than the previous generation.

Other than the 10x Optical zoom periscope camera on the back, the OPPO Reno also has a new type of pop-up camera. The company calls it the Shark Fin pop-up mechanism because it looks like a shark fin when it’s popped out. The module hides a 16-megapixel selfie camera and a soft flash. The rear side of this mechanism houses the flash for the rear cameras. According to OPPO, the motorized section will last more than five years. It even gets a fall detection feature, which will automatically close the pop-up mechanism to protect it during a fall.

The phone features a triple rear camera setup and since we’ve already described the telephoto periscope sensor, let’s talk about the other two sensors. There’s a primary 48-megapixel Sony IMX586 sensor with an f/1.7 sensor with OIS, which should make for impressive pictures. It can also shoot 4k videos at 60 frames per second. Accompanying this shooter is an 8-megapixel f/2.2 super-wide angle sensor with 120 degrees of view. Both these cameras have laser autofocus as well.

Moving to the front of the phone is a large, almost bezel-less display. The OPPO Reno 10x Zoom Edition features a 6.65-inch Full HD+ AMOLED display with Gorilla Glass 6 protection. With slim bezels at the bottom, the device ensures an impressive screen-to-body ratio of 93.1 percent. An in-display optical fingerprint scanner is also available for unlocking the phone.

The new OPPO Reno 10x Zoom Edition will be available throughout Nepal via its major retails and outlets from 29th June.