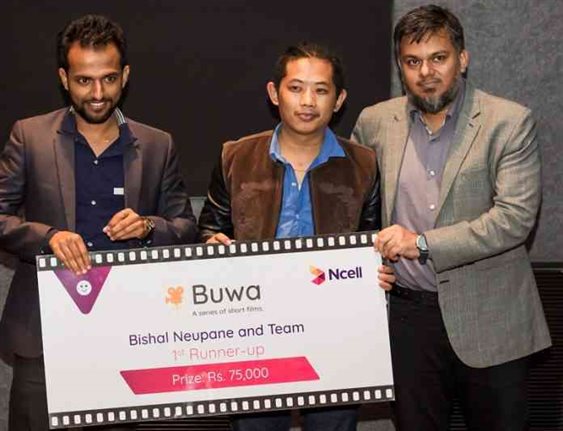 Kamal Subedi and his team received the first prize in the Ncell Short Film Competition organized by Ncell Pvt. Ltd. The theme of the contest was ‘Buwa’, which translates to Father in Nepali.

For the occasion of Father’s Day, Ncell had urged the willing short film makers to join the competition with a notice starting at the third week of Shrawan. Ncell said it was planning to encourage young talent in film making.

The contest consisted of more than 70 short films. The judging board was comprised of QFX Cinema founder and film entrepreneur Nakim Uddin, director Asif Shah and journalist Vidya Chapagain.

The award was handed over to the participants by announcing the names of the best short films. Mohammad Adil Issarar, Chief Technical Officer of Ncell also distributed the prize for the first, first runner up, second runner up prizes and two other consolation prizes to the winning short films.

The short film ‘Buwa’ made by Kamal Subedi and his group received 1 lakh cash prize as the first prize and each member received 10 GB of data per month for 12 months. In addition, the group will also have a chance to learn about shooting with director Asif Shah.

Similarly, Bishal Neupane and his group made the clip ‘The End of Culture’, which won the second prize. They received Rs. 75000 cash prize. The three members also won 10 GB data per month for 12 months. The Next Level Production’s ‘Old Age Home’ won the second runner-up award with a cash prize of Rs. 50000 and three members received 10 GB of data each month for a year.