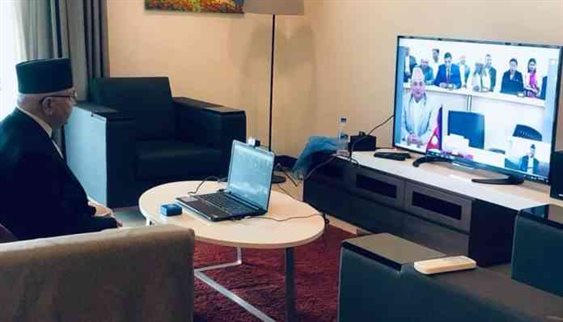 Technology has changed the very way we interact and communicate with other.  With the increased use of social based networks, people have enabled themselves to eradicate the long-distance communication barrier.Nowadays, everybody is within the reach in a virtual way no matter how far they are from one another in the physical state. The use of ICT has become a necessity; it’s now part of our everyday lives. People communicate through emails, faxes, Mobile phones, texting services, video conferences, and social media channels.  It is certain that more emerging technologies will change the way we communicate with the course of time. However, it will be up to us to embrace them or not.

Prime Minister KP Sharma Oli, who is in Singapore for his health checkup, on Monday held a Cabinet meeting under his chairperson-ship through the videoconferencing system. This is the first ever practice for Nepal.The telepresence of PM in the cabinet has been the talk of the town creating a whirring on Twitter, Facebook and even the mainstream newspapers.

This event has seemingly created a division of people for and against the issue. A chunk of people is declaring it as a historic cabinet meeting whereas the other masses taking it as a breach of privacy. Since it is the first time the government has decided to hold cabinet meeting through video conferencing, it may not sound exaggerating to label it as historical. However, the concern of another segment of people cannot be outright disregarded either.

The Nepali Congress (NC) has been at the front of the line standing against the event.  The main opposition (NC) has been reported to have strongly objected the recent cabinet’s meeting held through video conference. It is reported that NC spokesperson Biswa Prakash Sharma Said,“Cabinet meeting held via online video conference was not acceptable for us,’ terming the meeting as an instance of violation of privacy. He termed it a serious error as Prime Minister had already delegated the responsibility of the acting Prime Minister to the Deputy Prime Minister.

On the other side, it is also reported that The Prime Minister’s Office claims there is no danger in meeting of the Council of Ministers through that medium. The Prime Minister’s Office said there was no threat to privacy when the Prime Minister held a cabinet meeting through telepresence. Prime Minister Information Technology Advisor Asgar Ali has claimed on Facebook that the technology is completely safe. Advisor Ali on Tuesday, took to Facebook to clarify that the technology used for conducting cabinet meetings is not a breach of privacy. Ali through his status, explaining on how technology is connected in the process also urged not to be confused with Facebook calls, Skype calls, YouTube Live and false propaganda saying that all information is not available for security reasons.

How to Edit Videos in Google Photos? Enhanced Editing Features