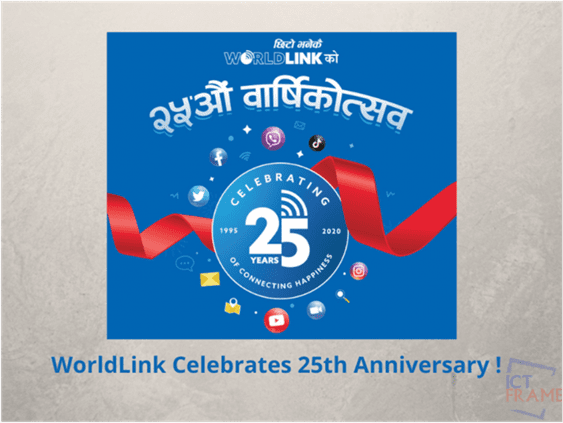 Nepal’s leading ISP company WorldLink has completed its 25 years of operation. The company had started its service in 1995 AD as a simple email service provider but now it has become one of the biggest IsP companies in Nepal. Worldlink’s Internet service has reached 73 districts of the country which is a huge accomplishment.

Dilip Agrawal, the then student studying in the USA wanted to talk to his parents via the internet which encouraged him to establish today’s ISP giant in Nepal. WorldLink today covers 43 percent of the total internet bandwidth used in Nepal. Mr. Agarwal considers that having every one in three internet consumers as their valued user is a matter of pride. Currently, the company has provided employment opportunities to more than 3500 people.

According to the director of Worldlink communications, Amit Agrawal, there are 21 lakhs users and 4 lakhs and 25 thousand connections. Not only that, there are around 10,000 WIfi spots in public spaces that provide free connections to the general public.

Similarly, the company has also provided NET TV along with the internet. Currently there are 1 lakh and 84 thousand consumers of IPTV.

Along with that, Worldlink is the fist service provider in Nepal to use IPv6 in the year 2018 AD. The company also received the ICT Award 2019 provided by the government of Nepal. Similarly, one of the pathbreaking contributions of the company is also expanding the internet broadband services to the Karnali region of the country.

On the occasion of its 25th anniversary, Worldlink has announced via a virtual press conference that it is going to expand its services to the rural areas too. The company’s CEO, Keshav Nepal announced this amazing news. Considering the pressure on the network, the decision has been taken.

Worldlink is also planning to issue an IPO to the general public in the coming days. After all the procedures to convert the company into public limited, the shares will be made available to the public, This will take some time.”We have to make some preparations for the IPO. It takes at least three years. What is the market like then? Accordingly, we can issue shares. But we are definitely preparing for that in the meantime, ”he said while speaking at a webinar organized on the occasion of the anniversary.

We congratulate Worldlink communications on its 25th anniversary ! We hope to see the company grow bigger and better in the coming days.

Meanwhile, are you happy with the services provided by the company? Let us know in the comment section below.