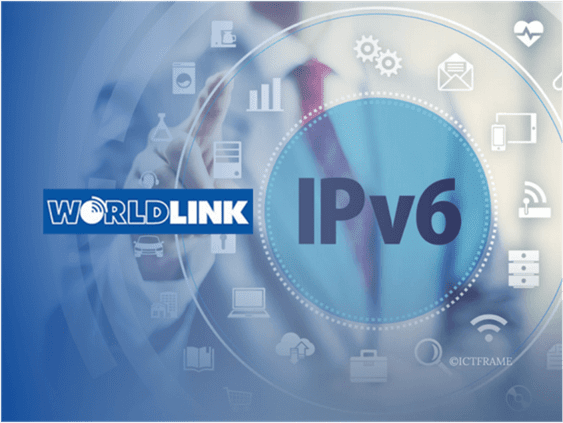 22nd August 2020, Kathmandu
WorldLink is enabling IPv6 for its all customers by this fiscal year-end making Internet experience better.
All devices connected on the Internet require one unique address called Internet Protocol (IP) address-to communicate with each other. The address is allocated by an American institution named Internet Assigned Numbers Authority (IANA) to all Internet Service Providers in the world.
There are two versions of IP one is named version 4 (v4) and another version 6 (v6). The Internet Protocol version 4 (IPv4) that is still currently in use, has only 4.3 billion unique public addresses and hence it got exhausted on 15th April 2011. As a result, most of the Internet service providers in the world are relying on Network Address Translation (NAT) technique using private addressing to alleviate the public IPv4 shortage problem.
The Internet Protocol version 6 (IPv6) is the recent version of the protocol that now allows unique routable public address assignments for every device in the world on the connected networks for communication.
However, with IPv6 the count of IP addresses is so huge that it will never run out of the addresses and it can be uniquely assigned to every device in the World that will connect to the Internet. With IPv6 address use, Internet access will also become slightly better than IPv4 as the NAT technique is not required.
At present IPv6 content is enabled by major content providers like Google, Facebook, etc. which is heavily used by all Internet users. Also in the device ecosystem, auto preference is done by end device browsers application for v6 than v4 when both are enabled.

WorldLink is the first ISP in Nepal to enable IPv6 on its network dated July 2019 and is privileged to be one of the few service providers of the World to do so. This development ensures simpler but robust networking and makes remote troubleshooting an easier task for the service provider helping customers to get superior Internet service.

While we are stepping into the IoT age this preparedness will help to implement IoT products on a large scale in the near future. This development has resulted in 1.55 lakh customers out of a total of 4 lakh WorldLink customers already on IPv6 network, carrying roughly 20% (165Gbps) of the Internet traffic currently delivered on IPv6 on Worldlink network.
As per the data published by Asia Pacific Network Information Center (APNIC), Google and Facebook currently around 26% of the network in the world is on IPv6. In Nepal, around 11% of the Internet network is IPv6 which is largely driven by WorldLink’s IPv6 enablement.
Not only that helps to make the Internet faster and scalable, but this will also help to make the Internet secure by assisting government and law enforcement bodies to easily and accurately track-down illegal activities and abuse on the Internet, which is quite difficult in IPv4 with NAT enabled.

What Are The Free Video Editing Software?