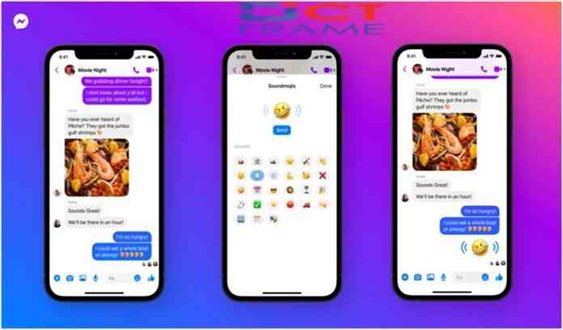 Therefore, on the occasion of World Emoji Day, Facebook is introducing Messenger’s latest feature, the feature is Soundmojis.

The messaging platform is now rolling out Soundmojis, or emojis that will have sound effects to enhance communication among people.

Soundmojis are the emojis that could talk. Soundmojis allows you to send short sound clips in a Messenger chat.

These sounds can range from clapping, crickets, drumroll, and evil laughter, to audio clips from your favorite artists like Rebecca Black and your favorite TV shows and movies like Universal Pictures’ F9, NBC, and Universal Television’s Brooklyn Nine-Nine, and Netflix and Shondaland’s Bridgerton.

How to check out Soundmojis?

To check out Soundmojis, you first have to start a chat in Messenger and then tap on the smiley icon.

Now you have to select the loudspeaker icon.

From there, you can preview and send your favorite soundmojis again and again.

The feature is only rolling out for iOS users as of now.

“We’re launching an entire Soundmoji library for you to choose from, which we’ll update regularly with new sound effects and famous sound bites. Each sound is represented by an emoji, keeping the visual emojis we all love in play while bringing sound into the mix,” notes Facebook.

Facebook also announced that it is also launching a complete Soundmoji library, from where you can choose different sound emojis.

The social giant also added that it will also regularly update the library with new sound effects and famous sound bites.

The draft list for the next round of new emojis was announced on July 16. The list includes a disco ball, melting smiley face, a low battery, and various new hand shapes.

The rollout of the new emoji was delayed this year due to the ongoing pandemic situation. The list will be finalized by the Unicode Consortium in September and the new emojis will be available on devices and platforms starting late 2021.