An anonymous user that goes by the username @LKhyah on Twitter has leaked data of 500 people through Twitter. The person has posted a link to Medium that not only contains the exposed data but also the motive behind this leak.

The person also accused the government of tampering with COVID-19 results in the Medium post. Moreover, the post mentions that two of the journalists who didn’t show any symptoms tested positive for COVID-19. The leaker claims that this result is fake and it was done for putting an end to the protest.

In fact, there are other accusations of arrests of journalists for writing something on social media. The leaker claims that SP of Birgunj along with the police force is demeaning the journalists and sending them to Quarantine for nothing.

The leaker promised to leak the data on a Twitter post mentioning ICTFrame, TechLekh, TechSansar, and TechSathi.

The motive behind this leak seems to be the demand for justice for Nepalese journalists. The leaker is trying to grasp the attention of the government and has claimed to double the leak until the government acts upon it.

What is in the Leaked Data?

The leaker claims to have leaked data of 500 people as of now. The leaked data contains name, phone number, and address (in half of the data). The person has uploaded two files; one containing addresses and the other without the addresses. 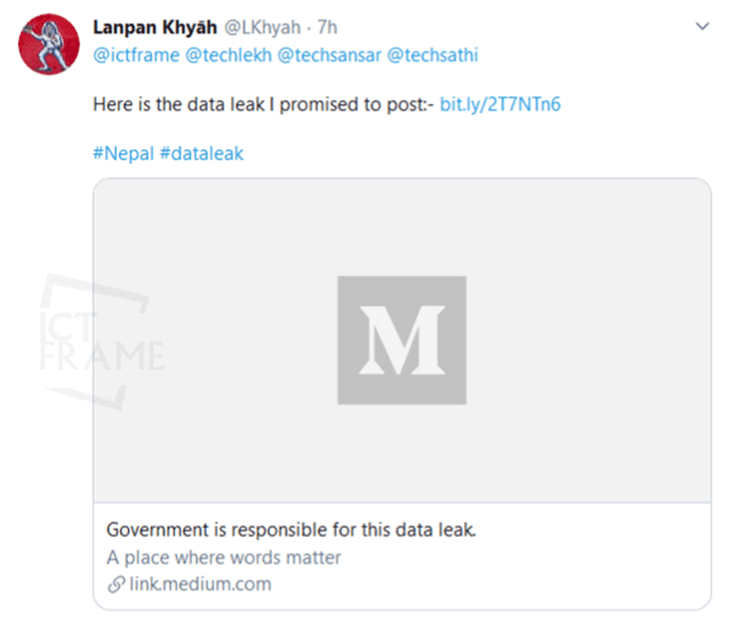 The data seems to be leaked from the database of Smart Cell. However, there is no such confirmation from the leaker.

Statement from the Leaker

Gadget Concern claims to have interviewed the leaker. In the interview, he (assuming its a male from the interview) said that he is ready to face jail. Furthermore, he has password-protected the vulnerability to prevent others from misusing the same loophole.

“I want the government to take action against the stuff I mentioned in the article if the government doesn’t want more innocent Nepali citizens’ data being leaked by me,” says the leaker according to Gadget Concern.

The leaker has gone on to post on Twitter that another leak will be a bigger one. He tweeted that he will upload another leak from the same database at 7:30 PM (NPT).

What does it say about the cybersecurity of Nepalese Companies? Do you think it is right to leak private information in order to seek justice?