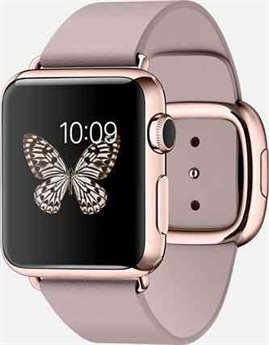 Are you excited about the watches that Apple is planning to come up with?
Well, its good news for you. Apple Inc. will begin selling some Apple Watch models in retail stores in a week. The watches will be available in  Italy, Mexico, Singapore, South Korea, Spain, Switzerland, and Taiwan on June 26, the company said in a statement.
The gadget was sold online and was kept in Apple stores only for the demonstration purposed. The reason was that they were trying to balance the supply and demand by the end of June.
With this news, Apple fans who couldn’t buy it online will be quite excited. Apple watches have been waited for long by the people. “We’re also making great progress with the backlog of Apple Watch orders,” Jeff Williams, Apple’s senior Vice president of operations, said in the statement. The watch is currently available in nine countries, including the U.S., the U.K., Australia, China, and Japan.
Apple watchers are said to have new user experiences. It features new technology and interactions. Apple has worked seriously on some of the factors like Communication, Health with the smartwatch. More features of the watch will also be discussed in the WWDC conference, and the future of Apple watch is also expected to be presented there.
With the competition in Smart wear, Companies have started focusing on gadgets like these. Smart watches are going to be the next big thing as they began for fashionable wear. There were many challenges faced with intelligent observations over time.
But these technologies are getting better day by day. The Apple watch is famous for its stylish design, smart interface; however, the expensiveness of the gadget takes away the fun.
There are also other demerits of the phone as it has less battery life and the number of Apps is very less. However, Apple will come up with new updates with every new release of Apple watch.

Protect Your Smartphone From Phishing Attacks in Whatsapp