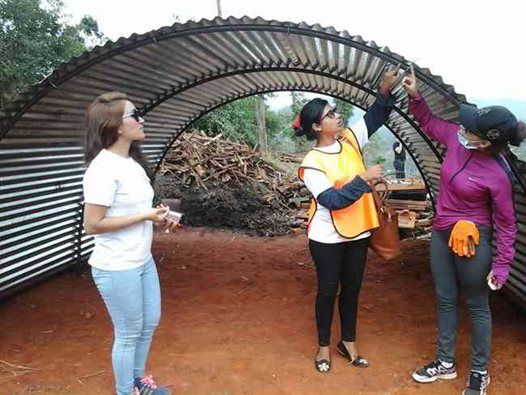 On Baisakh 12 (April 25, 2015)a 7.8 magnitude earthquake hit Nepal with its epicenter in Gorkha district. The quake has filled people with fear, destroying homes, historical monuments, and many infrastructures. Due to the frequent aftershocks and uncertain safety of the buildings, many people chose to stay out in the tents and open areas. Some of the most affected districts include Gorkha, Sindhupalchowk, Kavre, Kathmandu, Bhaktapur, Lalitpur, Langtang, and Himalayan regions.

The different artists have come together to build a shelter for the victims affected by the earthquake. With the motto of “We for everyone,” the artists have started making a shelter for people in Rampur Dada of Kavre. The aftershocks will least affect these houses built with the help of local people using a sheet. These shelters will also protect the victims from the wind.

The new shelters being created by the artists will be made up of household materials like sheets which reduce the cost. Artists like Keki Adhikari, Benisha Hamal, SurakshyaPanta, Barsha Shivakoti, DilipRayamajhi, Jeevan Luitel have been involved in this humanitarian act.

They have shown that they are not only loved due to their performances but also with their humanitarian acts. They have also been planning to build shelters for people in different places after Kavre. With the start of rainy reason, proper shelters are to be made with the effort of everyone is their saying.

The rainy season will surely create more difficulties for the victims with the rainwater entering the tents and damaging the household goods kept there.