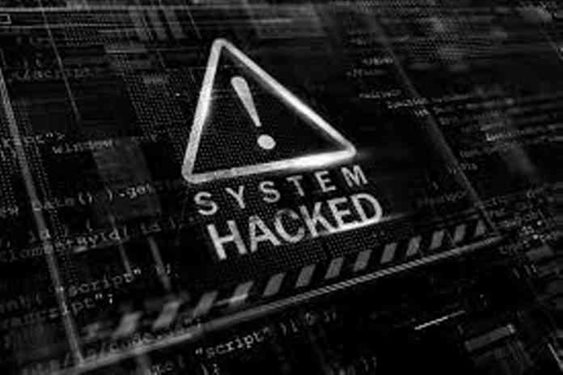 Bankers were panic-stricken after hackers threatened to hack the system of a bank affiliated with the Nepal Clearing House (NCHL).

The hackers have sent an email setting a deadline of July 22 to hack the systems of more than a dozen banks affiliated with NCHL.

When was the email sent?

What was written in the email? 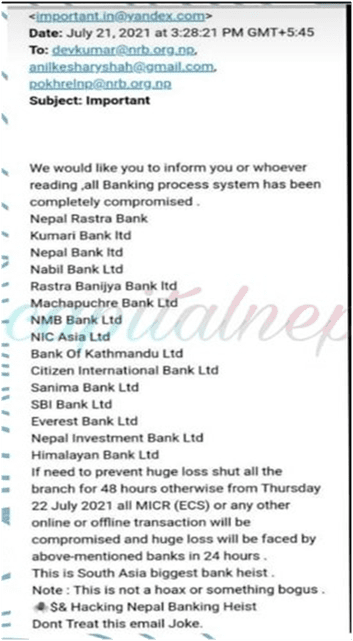 The Cyber Bureau has Started Investigation

The cyber Bureau of Nepal Police has launched an investigation into the incident of hackers threatening to hack 16 banking systems including Nepal Rastra Bank.

On Thursday, the hackers had called Nepal Rastra Bank spokesperson Dev Kumar Dhakal and co-spokesperson Nairan Prasad Pokhrel with threats to hack the banks and said that an email had also been sent.

“We have written to the Nepal Police Cyber ​​Bureau to investigate the matter further,” Pokhrel said.

NRB had started the study after receiving the phone call and message.

What does the study show?

Preliminary studies have shown that hackers used US numbers to target spokesmen and co-spokesmen. Three such numbers were used to call Pokhrel.

“We also found a call from some number, coding that number and sending it to the cyber bureau with the email address they were supposed to send the email to,” Pokhrel said. “They will take further action.”

He said that despite threats of a cyber attack on banks including Nepal Rastra Bank to rob money and steal data within 24 hours, no such risk has been seen so far.

In the screenshot of the email forwarded by the hacker, it is seen that Dhakal, Pokhrel, and Nabil Bank Chief Executive Officer Anil Shah have been emailed. The email was created on July 21, 2021, at 3:28 p.m.

The email, allegedly sent by a hacker, mentions the names of 16 banks.

The hacker wrote in an email that the above-mentioned banks have to suffer huge losses in 24 hours. Also, the note is not just a rumor, it is not even a joke.