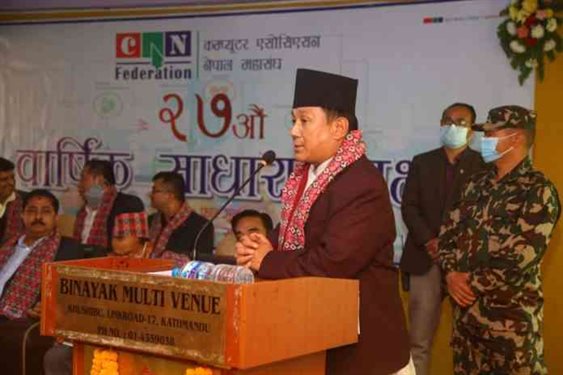 Minister of Communications and Information Technology Parbat Gurung said that the government is undertaking the required study to reduce the price of the Internet. Speaking at the 27th General Assembly of the CAN Federation held in Kathmandu on Saturday, he expressed the government’s commitment to reduce internet prices in the near future.

‘The Internet service was not successful because it was costly. The government is doing its homework to make it less expensive and effective,” he said.

He said that the Digital Nepal Platform has been implemented for the growth of e-commerce, e-education, health, and everything else and that its successful implementation would create a new blueprint for the country’s development.

‘The Citizen app is a connection to that. We are going ahead with the objective of a paperless office and service without any physical presence,” he said.

You may this like: Citizen Updated System is ready in Citizen Mobile App

According to Minister Gurung, there is no alternative to digital development to put an end to economic irregularities and corruption, save time and provide facilities for service recipients and the general public. He said that the government has given priority to making the telecommunications service efficiency and quality of the Internet.

He expressed hope that, along with the advancement of telecommunications and the Internet, other aspects of information technology will also reach remote villages. “Recently, the government has made a policy decision to expand optical fiber to remote districts,” he said. Adding that “it is our policy to connect every local body’s ward office, school, and health post to the internet as soon as possible.”

He said it will build infrastructure for all kinds of growth and open the door to investment and business expansion in hilly and mountainous areas as well. He also stated that businessmen and people’s representatives need in-depth training on computers, the internet, and other subjects.

You may like this: Nepali Internet Service Providers in the ‘Billion Club’

Minister Gurung said that the Ministry of Communications was ready to serve the CAN in preparing and proposing such preparation. He stressed the need to prevent it, saying that there is a trend in the telecommunications sector to develop infrastructure with government money and use it as private money.

“We blame the tower for not having picked up the phone. We are not challenging the purpose or technology of the service provider. It is, therefore, necessary to make consumers aware of this,” he said.

On the occasion of the General Assembly, the CAN Federation honored the organization’s strongest district committees. In which Parsa was first, Jhapa was second, and Rupandehi was third.