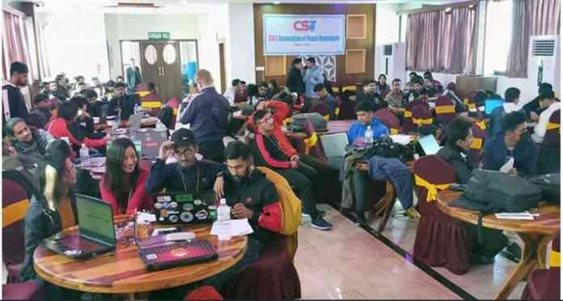 The 9th edition of the Information Technology Fair (CAN Infotech) organized in Butwal has been viewed by over 1 Lakh viewers. By the fourth day of the fair, over 100,000 visitors had visited the fair.  Five groups have been selected for the finals of the Overnight Hackathon Competition that started on Sunday.

According to CAN Rupandehi, teams RDC Lake, F Society, NCPTP, Pyroad.com, White Shadow have been selected from the first round of the 24-hour competition (overnight hackathon) to create software/applications. The organizers said that the finalists will be selected from the 5 teams selected for the second round and they will be rewarded at the conclusion of the fair.16 team participated in the hackathon for the first time outside the valley.

Suresh Bhattarai, joint secretary of the CAN Federation Rupandehi, said the overnight Hackathon operation was conducted in collaboration with the Trilotham municipality and the Nepathya college and the cooperation of CSIT Association. The competition has 54 IT students involved as participants.

The hackathon began at 12 pm on Sunday and lasted until 12 pm on Monday. The prize money of Rs. 50,000 will be given to the first team in the competition, Rs 20,000 for the second team and Rs 10,000 for the third team, said Ramudev Gautam, chairman and main organizer of the main committee of the festival. The fair began on Magh 17 at the playground of Butwal Multiple campuses. CAN Infotech, a nationwide technological fair has been remarkable in recent years with expansions to multiple cities of Nepal.