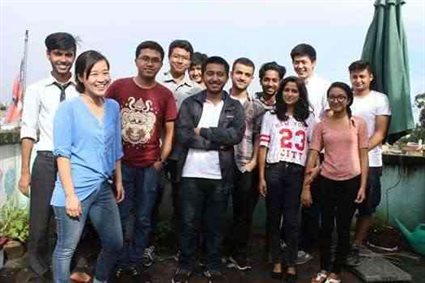 The orientation programme for TECH RISE ­ the first ever online coding boot camp in Nepal was held on Aug 1st Monday at Kupondole, Jago. TECH RISE welcomed in this month, eight highly motivated and passionate students as their first batch of students. Students were selected out of 100 applicants after going through a small prework and an interview.

Targeting the Nepali youth who have limited or no prior experience in coding, the company has already started its services and plans on expanding to reach out to many more who wish to learn how to code.

During the orientation, the background of why TECH RISE was created, the aims/objectives of TECH RISE, and employment opportunities were briefed by Co­founders Takehiro and Natsuko. The students immediately got started on learning Ruby and installed Ruby on Rails on their computer too.

TECH RISE aims to empower Nepali youths by teaching them how to code ­ expanding their financial capability and capacitating them to build innovative solutions to local issues. The social enterprise TECH RISE aims not only to potentially change the lives of the individuals but also make a substantial social and economic impact in Nepal.

During the learning time, they will learn and build apps with Ruby on Rails, HTML/CSS, JavaScript/jQuery, Git/GitHub, Team Communication, and Data Structures/Algorithms. During the program, the students will :

Takehiro Mouri, Co­founder of TECH RISE says that while the coding boot camp model is highly successful in countries like the US and Japan, there was nothing like it in Nepal. Realizing the potential for coding boot camps to benefit many Nepali youths, he was inspired to bring the model to Nepal. He added that the major plus points in learning at TECH RISE were: weekly mentor sessions, daily office hours, options to get hired as a mentor, and opportunities to work on projects outsourced from foreign startups and companies. The main principles of TECH RISE to create star coders are: learn by building, learn with peers, and learn with a mentor. TECH RISE is now opening up applications for the second batch of students. If you are interested, signed up here for http://www.techrise.me/