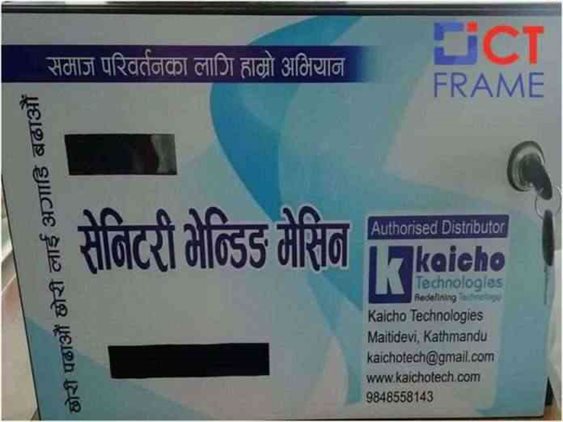 Kaicho Group has developed a sanitary pad vending machine. Developed with a QR payment facility, the machine has been handed over to the Ministry of Health and Population, Lumbini.

Minister for Health and Population Bhoj Prasad Shrestha has informed that the machine will soon be connected to Lumbini Provincial Hospital. The Kaicho Group has developed a smart sanitary pad vending machine intending to assist women in distributing and availability of sanitary pads.

Sujan Poudel, a member of the Kaicho Group, said that the machine was designed to connect public places, educational institutions, and various offices.

According to him, women/anyone can also get sanitary pads in this machine using their phone pay, e-service, pocket, IME page payment gateway, wallet. This machine can be easily operated in public places, bus parks, airports, public toilets, etc., using the payment method.

“As soon as the money is credited to our account, the machine automatically drops the pads,” he said. “Users can also check the availability of pads through the Unit window and alert us online if it’s about to finish.”

He further said, “After the user scans the QR code on the machine from the QR scanner in his mobile banking/wallet, the pad automatically falls off.”

He said that two types of machines had been provided to run on power lines and batteries. ‘Solar can also be used where electricity facilities are inconvenient. Also, the machine can be connected in places where there is no internet access, ‘he said.

The company says that the main objective of the concept and development of sanitary pad vending machines is to solve women’s health problems by increasing the availability of sanitary pads required by women during menstruation.

He said that a vending machine has also been made using the student’s identity card, keeping in mind the schools, organizations, and colleges.

He argues that the various state governments have come up with a plan to distribute free pads in the last few years, realizing the seriousness of the availability of sanitary pads.

Talking about the current trend of importing vending machines from abroad, he claimed that it would be easier for consumers to use homemade machines.

Similarly, women in remote areas of the country still do not have information and availability of sanitary pads. He said that sanitary pads and their availability could be made easier; many women could avoid various menstrual infections.

The price of the machine varies according to its design.

The Kaicho Group has also developed a vending machine that can extract dry foods such as water, biscuits, noodles, and chips and soon bring automatic petrol pump technology to the market in collaboration with the Nepal Oil Corporation.

IT Risk Management And IT Governance Firm In Nepal