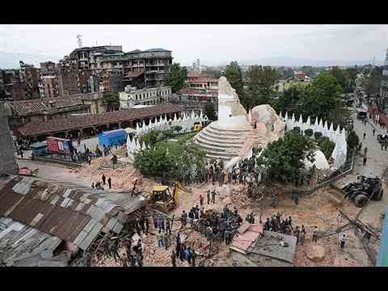 Earthquake is the natural phenomenon when two blocks of the earth suddenly slip past each other which sometimes results in aftershocks varying according to the magnitude. Unlike any other earthquake, the one that hit Nepal devastated the land claiming lives of more than 8000+ innocent citizens while leaving thousands homeless and injured.
The initial earthquake was said to have epicenter-ed west of Kathmandu near the China border on April 25, 2015. It was supposed to have been roughly around a massive 8.1 magnitude. People all over the country fled in terror as strong aftershocks kept on piling time after time. The earthquake left millions traumatized fearing the unknown.
Historical monuments like the Dharahara, Krishna temple and other heritage sites collapsed and degraded to mere rubble. As weeks passed by people started to gain courage and enter into their homes to continue their healthy lives. But non the less nature took a toll for the worst on May 12, 2015, as another considerable quake struck Nepal but this time it epicenter-ed 50 miles east of the capital city. It was measured to be a mind-boggling 7.3 magnitude which was strong enough to emit tremors around China, India, and Bangladesh.
Again, 42 people were killed and thousands injured but worst of all the countries economy went crumbling down, but that was their least of concerns. Terrified citizens camped outside in their makeshift tents.
This comes to show how unforgiving and powerful mother nature can be. This event will be talked about, discussed and remembered for a very long time.