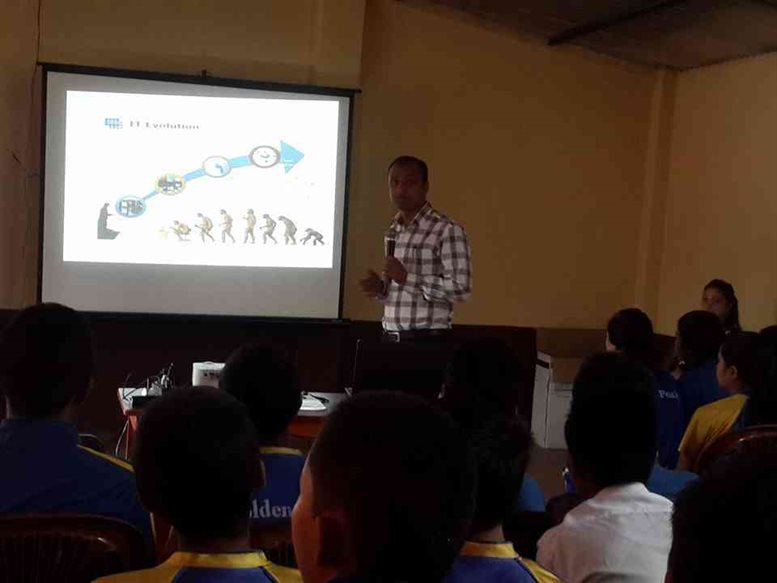 CSI Nepal completed its 19th awareness program at Golden Peak School, Saraswatinagar, Chabahil. The team has been on a campaign to strengthen the level of cybersecurity in Nepal, so in this latest effort, CSI Nepal gave valuable lessons to the students of grade 9 and 10 of the school. Mr. Chiranjibi Adhikari was the speaker on behalf of CSI Nepal where he spoke about the situation of cybersecurity and its necessity.

During the whole session, Mr. Adhikari shed light on multiple topics related to IT like social media, ethical hacking, cyber crimes, etc. He presented proven facts and figures and real-life accounts of cyber security to showcase the actual scenario of the issue. Similarly, he talked about things to do and not do, mainly focusing on the social media aspect, citing it to be the central hotspot of cybercrime in Nepal.  The message of the need for awareness while using the cyberspace was delivered to the students.

Ms. Kala Rai, a Director of Golden Peak High School, thanked the CSI Nepal team for the awareness campaign being organized in the school. She focused on the need for school students to be monitored in the society so that they use it in the right way and do not fall victim to various problems in the cyberspace.

Mr. Chhatra Mani Rai, Principal of Golden Peak High School also thanked the team for their efforts and wished them luck for further progress in this campaign. He said that it is essential to provide knowledge to students about these issues of crime on the Internet as most fall victim due to lack of awareness.

This campaign which is steadily taking its pace has been the conceptual work of Dr. Ramhari Subedi, CEO of CSI Nepal with significant support from Mr. Prem Bhandari – Civil Engineer /CEO of AMA Engineering, Virginia USA and Mr. AnilPandey – CEO of Motherland Nepal Organization, Honorary PRR of NTB, California USA showing a drive to help spread awareness on this issue.