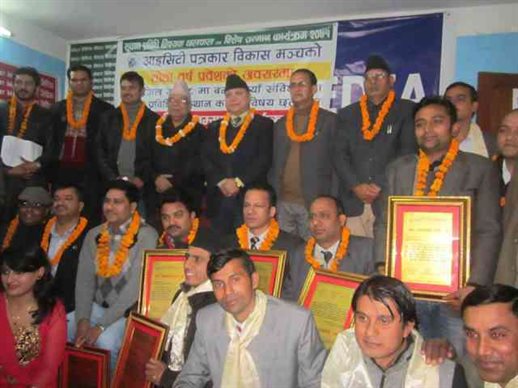 On 22nd July 2016, an interactive program on Cyber threats, Cybercrime and Cyber securities along with the current issues on banking sectors caused by the Cybercrime were successfully conducted as a concern of Ex-Finance Minister, Dr. Ram Saran Mahat. Not only this, publication of ICT Journalist Development Forum, Cyber ICT Info Newspaper was also inaugurated successfully In Tandem with many IT industrialist, expertise and many national games.

The objective of this conference not only limited within this scenario, but many people in business and expertise were also praised and awarded during that program. Among them, young ICT businessman, Bishwo Ram Balami was also awarded the title “ICT Award 2073 BS” for the contribution on ICT sector and social works.

Bishwo Ram Balami is an energetic, enthusiastic and dedicated people in the field of ICT.  As morning shows the days, from his childhood, he is very much curious about technical works and still shows his passion for the ICT sector. He had spent around two decades of his entire life for the promotion of the ICT sector. And currently, he is working as a General Secretary of CAN Federation and an executive director of Swastik Distribution Pvt. Ltd.

Swastik Distribution Pvt. Ltd. is one of the Pioneer and recognized company in the field of modern appliances and technologies in IT. It is established under the alliance of many experienced, professional and expert team on Information, Communication, and Entertainment Technology (ICET). It primarily deals on computer, communication and electronic engineering. From the beginning of its establishment, all the expertise and professional team members have a common motto on providing quality products to their customer .So they still working on this ideology and searching for opportunities to introduce their branded IT tools among many customers at a reasonable price.

So they have divided their products into many categories like Electronic Security and Solution, Optical Fiber Cables and Solution, Telecom Products and Services, Office Automation and Solution, CATV and wireless TV Solution, and Data/ Voice/ Video Solution to fulfill the demand of their customer needs. Beside In Tandem With (collaboration) many business partners like Paramount, LHY/LINK/BOSCH-CCTV, HUAWEI, ABC, VCOM, MATRIX, GOSPEL, COSHIP, PANASONIC and CANON, etc.; they can launch their products.

Not only this Mr. Bishwo Ram Balami told that they are still planning to introduce new products like CCTV– for calculating the speed of the vehicle and Launching new apps like SMART Home – for securities of home. This smart home typically works on the concept of IP based Door Access System. Such that being anywhere we can handle the ON and OFF mechanism access of door and windows based on SMS Service. So we need not have to worry about outgoing.

Isn’t it sound interesting?  Furthermore, in future as well they have planned to introduce new and fully modernized appliances’ in Nepal for Social Securities and national development.

That’s why the glory of this branding company is rapidly increasing day by day.

Bishwo Ram Balami is one of the idols and inspired people for every ICT lovers. If we were able to follow his single steps, then I am assured that we can create lots of jobs in our country and no one has to go for searching for a career in foreign countries.  For IT students it is very essential to walk on the path of him. Then only, the appearance of the Nation would be changed based on technology.

So he is likely to be called as a packet of inspiration and devoted his life for the development of ICT. He told that construction of Nation is only possible through Broadband internet, Software Development and Mobilization of Private organization. So let’s know about him.

He was born in Kathmandu at Sitapaila around 2032 BS. From his childhood, he was curious in nature and showed his keen interest in Technical Instruments like TV, Radio and other appliances. Whenever he got that, he opened it and did some research.

Sometimes he became a success while sometimes he had to tolerate the scold of his mom and dad for the damage. As time passes, he had completed his schooling from Siddhartha Banasthali School. After that, he showed his interest in Science faculties and joined in Amrit Science Campus (ASCOL) for ISC program.

During that time, IT was rapidly increasing, and most of his friends along with him decided to promote IT background in their career. So he had joined lots of institutes for IT courses. He got enrolled on CNE (Certified Network Exam) conducted by NOVEL. Furthermore, he joined the National Computer Center in Singha Durbar to study diploma in Computer Science. During that time he bought a computer 386 an assembled computer around 75,000.

This also indicates how he was interested in the IT field. It is also one of the turning points of his life towards an IT Sector. He further remembered that one of his school teachers had a computer at home and he showed his interest in watching the teacher’s act on Computer. Finally, with his curiosity and enthusiastic action, he had decided to know more about it and got engaged on several computers based training. This was the main turning point of his life towards ICT.

Although being a Science Student, he had completed his master’s degree in Management. During that time he had already worked on more than two organizations. After completion of Master’s degree, he worked on Nepal Telecom as a CTO (Chief Technical Project Officer) but could not able to satisfy himself on jobs. So he left the jobs and established IT company to boost up his dream and develop himself an entrepreneur.

At the very beginning, he had to face many challenges to establish himself in the market. Finally, he became familiar with the market and solved all the problems that come in front of him. He believed that without knowing about market competition, innovation on Technologies and updates, no business could able to meet its goal. So he continuously worked on this strategy and concept. And finally, these strategies make him able to establish himself as a successful entrepreneur and businessman.

As every person success there is someone behind, likewise in his life also family support played a remarkable role. He had got full support of his parents and his wife. He got engaged with sway at around 2059 and had one son and one daughter. They took care of him a lot. Beside He got lots of work opportunities in his life. He establishes his career on Software and broad his career on Hardware and Networking, Optical Fiber, Telecom like BTS, VSAT, Tower installation, etc. He even got an opportunity to go to Japan, but he left it. He believed that he could do some valuable work for the country in the field of ICT. This is the inspiration for every ICT lovers.

So for his contribution to social service, he was praised with the award of National service in 2069. He was also awarded by Ex-Vice President for his social work on Nepal Red Cross Society and working on Higher Secondary School. He taught many IT institutes as professionals, and during that period he got an opportunity to visit and explore his Technical ideas among rural people in several districts like Manang, Mustang, Mugu, Dolpa, Humla, Jumla, Dailekh, etc. Perhaps there is no any district where he had not worked as an ICT trainer. Not only this he also worked as Network experts and installing Telecom Accessories like BTS, Tower.

So his contribution is very remarkable for the national development.

He believed that the imagination of IT sector is impossible without the Broad Band Internet, Software Development and mobilization of Private Sector. So, he himself focuses and still now working on how to improve these things. He believed that the country statuses need to be understood and prioritized at first before implementing any terms and policies.  Then only sustainable development would be maintained.

Furthermore he told that governments need to provide lots of opportunities for newcomers in the IT Field. And time demands to maintain huge competition among every IT business organization. Then only domination of foreign IT companies would be reduced, and thousands of jobs would be created within the country. He further added that IT background student could not be handled within the specified limits as they have Globalized market and per day they have to face and tackle the Global Completion with the latest technologies. So, all the concern authorities need to put special attention on it and should maintain clear vision on implementing the policies rather than just making. So it’s time we all have to work together and think of like Bishwo Ram Balami for the national development.

What Do CAN Federation Members Say During The COVID-19 Pandemic?