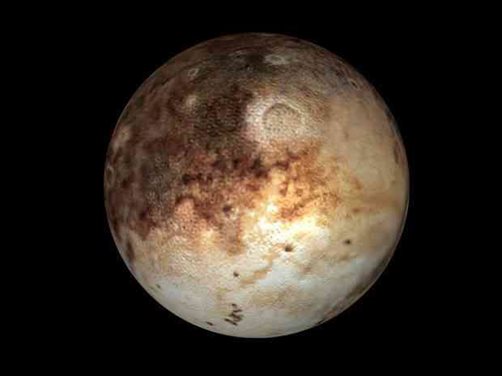 Surface materials have been found flowing around mountains and even accumulating forming ponds of Nitrogen in Pluto. Scientists have reasons to believe that the activity could certainly be very recent and by recent they mean any where from a few tens of millions of years. Not much has been known since the mission team has received only 4-5% of data during the historic flyby of the dwarf planet on 14th July.

​The New Horizon’s principle Investigator Alan Stern says, “Pluto has a very complicated story to tell ; Pluto has a interesting history and a lot of work needs to be done in order to understand this very complicated place”.
U.S space agency’s HQ. in Washington D.C. outlined new analysis from the limited data set in possession. The analysis assumes that Pluto has a much less dense atmosphere than previously predicted. The observation was made by a probe while the flyby of Pluto.
This planet is covered with very cold Nitrogen, Carbon-monoxide and Methane ice which could melt and flow with the slightest of thermal rise. The idea of glacial activities in this barren planet could get public attention. This phenomenon was interpreted to have happened at the edge of what is now known as Sputnik Planum , which is a plain in the western half of Pluto’s bright heart like feature, north of it’s equator.

​
Wave patterns were recorded in the process of capturing images through High-end resolution camera from New Horizon’s ‘Lorri’ These patterns resemble flowing ice of glaciers viewed by the satellite on earth.
“Water-ice at Pluto temperatures wont move anywhere ; it’s immobile and brittle, but on Pluto the kind of ice we think makes up the Planum (Nitrogen, Methane, Carbon-monoxide, ices), these ices are geographically soft and malleable even at Pluto’s conditions and they will flow in the same way that glaciers flow on Earth”,said Bill McKinnon co- investigator from Washington University in St. Louis.
New horizon continues to examine Pluto even though its shifted about 12 million KM beyond the dwarf planet.
The probe still monitors its slow rotations as 1 Pluto day lasts 6.4 earth days. The observation will seize in about a weeks time.
In September, engineers will command New Horizon to start sending back all the information it has gathered during the flyby. Therefore, the Pluto observation wont finish until late 2016.