An incident that depicts the incompetence of the government occurred on Thursday (July 23) when government officials called upon the representatives of a private startup company at Singha Durbar.

In fact, the behavior shown by the officials at the Ministry of Communications and Information Technology was unethical.

Pravesh Koirala, a Computer Engineer at the Ministry invited Aditya Raj, Founder at a startup Company called Digital Nepal, to the Ministry.

“Upon receiving the call, I thought that it was regarding the application requested by the National Planning Commission with the aim of providing startup funds,” said Aditya.

“The employees at the Ministry said that our startup cannot use the term Digital Nepal for any purpose,” he added while in conversation with ICT Frame. “I was shocked and asked them the reason behind it and they said that Digital Nepal is a campaign launched by the government and being a single entity or a private company, we cannot use Digital Nepal.”

He also asked if they were willing to provide compensation since it would involve rebranding. However, there was no positive response regarding compensation.

According to Aditya, one of the major reasons for the discussion was the fact that Aditya’s DIgital Nepal company ranked higher in Google. This overshadowed the Digital Nepal campaign of the government.

This would ultimately drive more visitors to the company’s website rather than the government’s site.

“We are a registered company under the Company Act and have existed way before the Government launched the Digital Nepal campaign,” said Aditya. “We have worked hard to build up the company’s brand using SEO and other strategies. Rebranding would cost a lot and it would be like starting from the ground with all our efforts down the drain.”

He also highlighted the fact that COVID 19 has hit them hard and thus, the company is not in the state to handle the hassle of rebranding.

However, the government employees did not care about the company’s state and wanted them to change their company name, domain, as well as their app’s name.

Even though the Deputy Secretary at the Ministry, Shiva Kumar Pokharel, denied telling Aditya to change the company’s name, this incident brings forward the incompetence of government.

Government websites lack the practice of SEO and this incident also shows the lack of general knowledge of SEO among the employees of the Ministry.

Digital Nepal Has Received Award from the Government

In fact, the startup received a cash price of Rs. 2 Lakhs including a trophy from Prime Minister KP Sharma Oli. 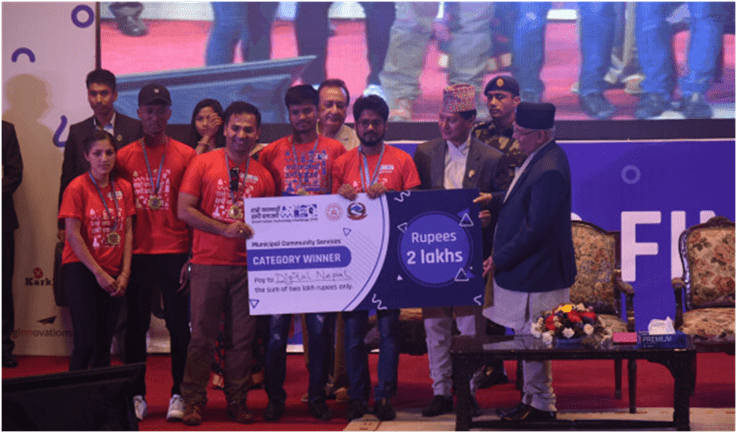 Similarly, the Ministry of Education, Science, and Technology handed over the ICT Startup Award to Digital Nepal in Shrawan, 2076.

So, Digital Nepal was doing very well as a brand and an idea to digitalize the education system in Nepal.

Aditya’s concern is that no one had objected to the company’s name or its domain name during registration or while receiving the awards from the government.

After being established as a reputable brand, the Ministry suddenly had a problem with the company’s name.

Government Has No Jurisdiction Over .com Domain

The fact that the government objected to the use of the term Digital Nepal in the domain makes no sense. It is because the domains other than .gov.np are outside the Government’s jurisdiction.

In fact, the .com domain falls under the generic Top-Level Domain (TLD) category and are maintained by the Internet Assigned Numbers Authority (IANA).

The Internet Corporation for Assigned Names and Numbers (ICANN) manages the issuance and regulation for such domain names.

As an entity or organization involved in digitalizing the education sector of the country, one should hope for the government’s support. However, the case is exactly the opposite here.

What point is the government trying to prove by intimidating a startup?

Isn’t it the government’s responsibility to encourage and nurture young talents?

This incident has raised so many question marks. No law gives the government the right to intervene in this matter, especially regarding the ownership of the domain name.

Even after all of this, Aditya told ICT Frame that they would be happy to assist the government with their Digital Nepal campaign.

However, this approach by the Ministry officials violates the general rights of the citizens involved in the business sector.

What are your thoughts on this matter? Let us know in the comments!