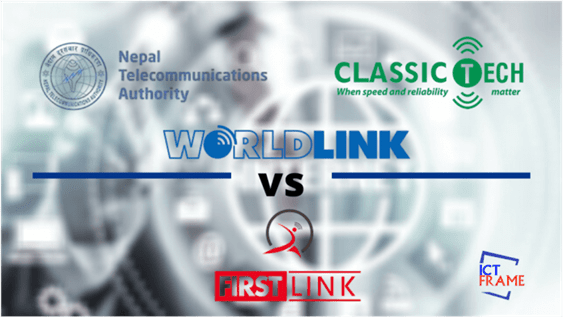 Internet Service Providers (ISP) also require internet service that they can provide to their customers. Firstlink Communication filed a complaint saying they did not receive their services.

The company provides internet service in Jhapa, Damak, and covers most parts of Eastern Nepal. They filed a complaint stating that the company themselves are not receiving the service.

After NTA received the complaint, it held a discussion with the representatives of both the companies. In fact, Worldlink agrees that they cut-off the services for Firstlink Communication. In this discussion, it was also revealed that it was the Operator of Classic Tech Pvt. Ltd who forced Worldlink to cut off the service.

The spokesperson of Firstlink say that they were initially taking service from Classic Tech but their internet quality was not good and therefore they switched to Worldlink.

Worldlink reconnected the internet service to Firstlink but it seems that NTA took no legal actions against such unethical action.

Firstlink Communication believes that this is unethical and commercially wrong. The company’s clients suffered a huge loss as well.

The Operators of Classic Tech not only threatened other service providers to not do business with Firstlink but also threatened to erase them as a company.

In such power-driven law, the representatives of Firstlink Communication worry about the future of lawful services. Since then, Firstlink is working on bringing its own bandwidth from abroad countries.

This is actually sad news to read. This power game reflects not just within the internet providers but throughout Nepal.

Big players are able to twist legal agreements and also not come under the legal inspection.

Do you think Worldlink and Classic Tech were right in their action? Should they be punished for performing unlawful acts?

If such is the case, does it not question our privacy and security as well?

Most of us use the internet services by these big players. This act alone reflects the crime potential. Will companies like Classic Tech and Worldlink sabotage our rights and freedom to favor themselves?

This makes us question laws, associations, and authorities.

What are your thoughts?