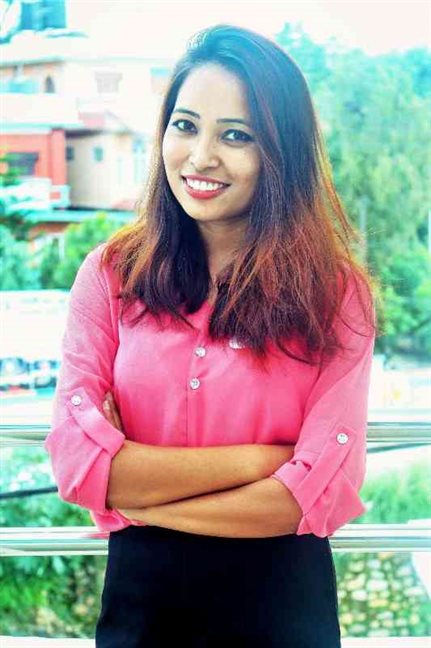 ICT Frame presents an interview session with Binita Shrestha who is the CEO of Women in STEM Nepal. Women in STEM Nepal is a social enterprise which conducts Workshops for high schools kids and young undergraduate girls. WiSTEM motives to encourage and promote young girls in Science, Technology, Engineering and Mathematics as the field has a considerable gender gap.

How did the concept of Women in STEM Nepal come up in your mind?

First of all STEM stands for Science Technology Engineering Mathematics. Back in 2009 when I was in my high school, I took Physics and computer science as my major subjects. I was only the girl student taking physics and computer science as my primary subject, the rest of the girls was in the biology group. Being around the numbers of boys was awkward for me. I requested many of my female friends to come to my class, but they denied.

Form the very early days of my childhood I always wanted to be an engineer and luckily I was right in science and mathematics. After high school, when I went to university for my engineering course, I found many girls whose stories were similar to me. After hearing each other stories we decided to do something in STEM then we started Women in the STEM as a community because we were not confident whether it would work or not, but surprisingly it went so well. We got around 100 female participants until the end of a year.

Who inspired you for Women in STEM Nepal?

I enrolled at NCIT College in 2011. After joining NCIT, I realized many things. I found many drawbacks in our education system; the education system seems to have no collaboration with industry and working attitude. While doing Bachelors, I started going to different program related to ICT, leadership and among others which always motivated me to do something new. There held an event called ‘Ncell App Camp’ which came as a turning point for me. I was a leader of my team during the game; the leadership taught me various things. Likewise, I began to participate in many other events then I discerned that many things can be explored.

How is the current status of Women in the STEM?

Well, everything is going great. In every event of ours, we are getting healthy numbers of participants. Similarly, we are coming up with many exciting workshops and events that could be extremely beneficial to all those girls interested in STEM. Likewise, we are getting great positive feedback from everyone.