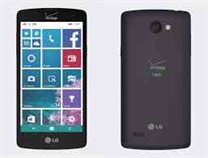 Conclusion: The Lancet Verizon wireless will satisfy less demanding windows phone users on a tight budget, but the low price is worth compromising.

The market for windows phone has dropped lately. Although LG is not the fastest one’s when it comes to the release of mobile phone’s. But surprisingly they now have introduced a flagship level smartphone worth  $120 ( off contract ).

The phone is a windows version line up offering essential performance at a low price so saying no to this serviceable budget-friendly device is very hard indeed. This particular model compliments the midrange Lumia 735 and high-end HTC one (m8) windows.

For some reason, the set feels a bit squat but other than that it fits perfectly on the palm. The Lancet also houses a 4.5-inch screen with 854 by 480 pixels LCD.

Critics say that there are some display deficiencies and color depth leaves something to be desired. The text-heavy websites seems a bit grainy, and the viewing angle is also narrow. Brightness and contrast vary after a tilt of 30 degrees angle and back light from the device also bleeds towards the display edge.

According to ‘Fastest mobile networks survey’ Verizon claimed the top spot. It supports all carriers 3G, CDMA, and 4GLTE spectrum. It is also the first windows phone to support HD calling but not enabled by default; therefore, you need to enable it manually in the cellular settings. The call quality is normal with plenty of volume in either side of the ear piece. There is a slight muffed transmission through the mic but rather than that indoor noise cancellation works well damping near by objects like a fan. For connectivity, the set rock’s an 802.11b/g/n wifi and a 4.0 Bluetooth with GPS, but it still doesn’t have the NFC feature.

This device uses a Snapdragon 410 for the Lancet with a 64-bit variant found in many Android contemporaries. Therefore it is compared to android phones containing good GFX bench graphic scores. But graphics have to be lowered to achieve smother frames in games like Asphalt 8.

Other than that there seem to be no lags or significant hang-ups. A great tweak that this device has is the double tap screen interface to wake up the device from sleep. Storage wise, it has a 4 GB of free storage and a Micro SD slot, for unlimited storage which accepts cards up to 128 GB.

This device has a 8 MP camera but even in good lightning the color looks faded and washed out in the rear camera. Image quality falls apart indoors with grainy image noise. Although the video quality is 1080 P, it suffers the same faith as the still images with shaky footage and smeared details .

So all in all a budget-friendly standard performing phone for less demanding windows phone users.

How to Check Own Number in NTC, Ncell, and Smart Cell?