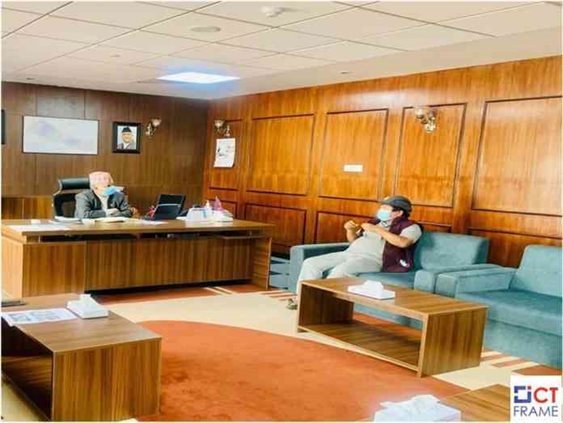 In the meeting between Deputy Prime Minister Ishwor Pokharel and Mahabir Pun, they talk about supporting the Innovation Center as much as possible.

According to a press release issued by his press advisor Ganesh Pandeddhara, Pokharel praised Pun, who is also the chairman of the National Innovation Center, in the battle against Corona during a meeting at Singha Durbar today.

Pokharel said that all people must play a positive role in the battle against Covid-19.

During the meeting, Pun, Chairman of the Innovation Center, stated that they had prepared and distributed 11 different products for free as soon as the Corona crisis hit.

According to him, the innovation center has distributed 38,500 sets of PPE at no cost so far. Scientist Pun urged Deputy Prime Minister Pokharel to save people’s lives even if it meant passing ordinances and laws by the state of emergency.

According to the statement, Pokharel encouraged Pun to work for a healthy life as the work of the innovation center was exemplary.

He said that the government would provide the innovation center with all necessary assistance.