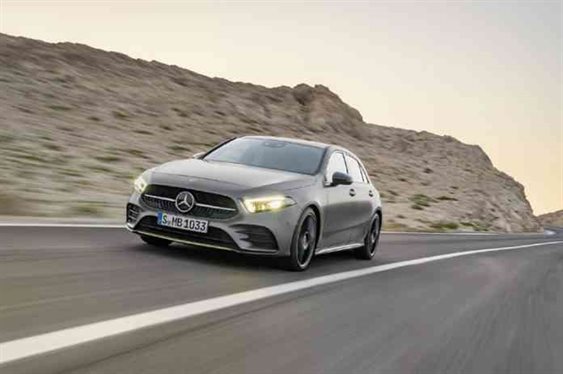 “This will establish an all-new gateway to our brand for those who are young, and those who are young at heart,” Exler said. The A-Class has been available in Europe for years but looked much different in its previous incarnations. Once a small hatchback described by a German engineer as “a car for old people,” the A-Class has now transformed into a sharp, modern machine aimed at a new generation informs Robb Report.

The new A-Class comes with one crucial piece of standard safety equipment — automatic emergency braking with pedestrian and cyclist detection. If you want something closer to semi-autonomous cruising, you’ll have to shell out for options, but a well-equipped A-Class will be able to keep itself in its lane between 37 and 125 mph, in addition to safely changing lanes and maintaining its space in traffic.

The new A- class is slightly longer and wider than before and therefore roomier inside. The thing that sets this car apart is its incredible cabin; it features cool options like groundbreaking augmented reality satellite navigation system, this uses a camera to display the road ahead and then overlays direction graphics on top of the image, so you know exactly where to go. Then at night, you can amuse yourself with the 64 ambient lighting options.

The car has a leading driver assistance system which is better than a one in Audi 3 and BMW 1- series. This particular car has 2 liters turbocharged petrol engine with 224 Horsepower.

According to the Car TV, For the time being, the 2019 A-Class Sedan will only be available in two trims — the front-wheel-drive A220 and the all-wheel-drive A220 4Matic, the main difference between the two being the number of driven wheels. Both variants receive the same engine — a 2.0-liter gas I4 that puts out 188 horsepower and 221 pound-feet of torque. A seven-speed dual-clutch transmission is the engine’s soul mate, no matter if it’s FWD or AWD. It’s electronically limited to 130 mph, in case you feel like breaking the law. The 2019 Mercedes-Benz A-Class Sedan goes on sale in the US in late 2018. Pricing has not yet been announced, but those details should bubble up to the surface shortly before the car hits dealers.