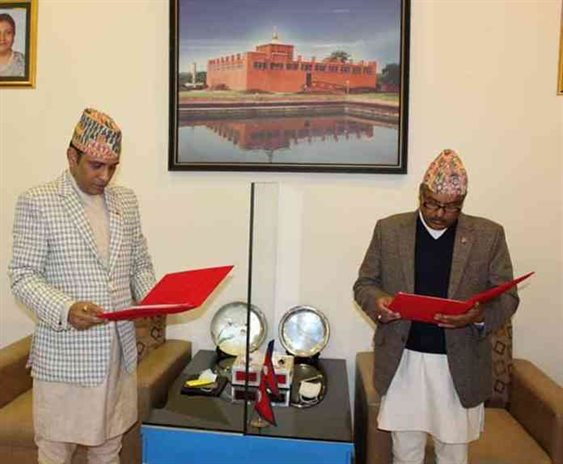 The newly named chairman of the board of directors, Madhu Kumar Marasini, has taken the oath of office and confidentiality from Governor Maha Prasad Adhikari of the Nepal Rastra Bank.

Speaking at the ceremony, Governor of Nepal Rastra Bank Maha Prasad Adhikari congratulated the newly named Chairman and wished him all the best. And have expressed faith to make a contribution.

He expressed his determination to make more efforts to strengthen the bank’s financial metrics and to drive the bank forward with new energies and momentum for the bank’s business growth.

On the occasion, the Board of Directors of Nepal Bank Ltd. Dipendra Vikram Thapa, Kedar Prasad Paneru, Dr. Savitri Ranjit Shrestha, Vivek Shamsher, Vishnu Kumar Agrawal, and Om Krishna Shrestha were present. The situation was told and the Deputy Chief Executive Officer of Bank Samata Pant was also present on the occasion.