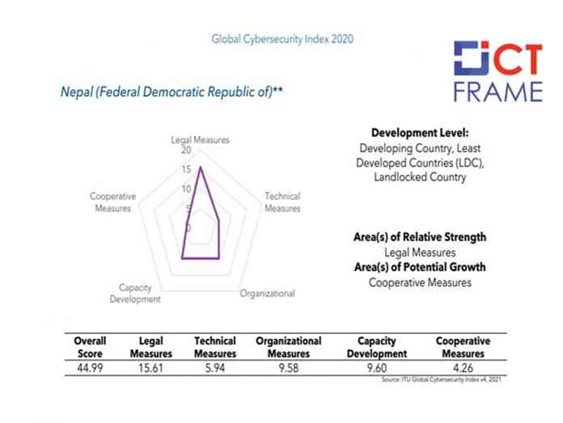 Nepal made improvements in the field of global cybersecurity. According to the Global Cyber ​​Security Index released by the International Telecommunication Union (ITU) recently, Nepal has managed to climb 15 places in the cybersecurity rankings.

The Global Cybersecurity Index (GCI) was first started in 2015 by the International Telecommunication Union (ITU).  To measure the commitment of 193 ITU Member States and the State of Palestine cybersecurity. And also to help them identify areas of improvement and encourage countries to take action through raising awareness on the state of cybersecurity worldwide.

Nepal has risen by 15 places in the last two years due to various policy reforms in cybersecurity and steps taken by the government for public awareness.

According to the report, Nepal has scored 44.99 points in various fields of global cybersecurity. The study was conducted based on five areas: the legal system, technical, organizational, capacity expansion, and corporation.

Nepal is weak in terms of cooperation required for cybersecurity, according to the report. Nepal scored only 4.26 points.

Should Nepal be concerned?

However, Nepal looks very weak compared to the neighboring countries. According to the report, India ranks 10th in the world in the Cyber ​​Security Index. Another neighbor, China, is ranked 33rd. Nepal lags behind many other countries in terms of South Asian countries.

Only Afghanistan and Bhutan are after Nepal, and India, Bangladesh, Pakistan, and Sri Lanka are ahead of Nepal.

The United States tops this year’s Global Cyber ​​Security Report. The United Kingdom and Saudi Arabia are in second place with the same number of points. Estonia is in third.

A questionnaire was prepared for each of the five regions to prepare this report according to the association. One representative was appointed from each country.

The report has been prepared based on the information collected from it and certified documents and discussions with experts. Half of the participating countries formed the National Computer Incident Response Team (SERT) during the study.

Nowadays, in the context of easy Internet access, especially online and mobile businesses. Sensitive transactions take place online because of which cybersecurity incidents are increasing day by day. According to the research, Nepal is the top target country in “cyber threat.”

Cybersecurity policies draft has listed out few points to improve the rank in the Global Cybersecurity Index.