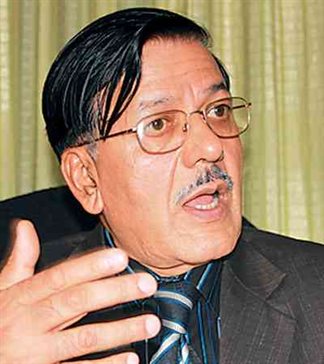 On 2007, Jestha 2, in Parbhat district, Seudas place, Neel kantha Uprety was born who has faced various circumstances throughout his life. Uprety, who did his schooling in Parbhat district’s Falebas place’s Bhagwani Vidyapeeth, graduated his SLC from Chitwan’s Arunodaya Secondary School. After graduating SLC in second division on 2025, he started studying I. SC in Chitwan’s Birendra Bahumukhi College, after finishing that he came to Kathmandu. After entering to Kathmandu, his life took a new turn. With some sorrows, struggle, his story of successful is linked with Kathmandu. Starting from rupee one, computer operator, his journey has made him an international personality with full of success.

Uprety who came to Kathmandu in searching for job for his survival, didn’t have the job such easily. The year 2027 just went like that in search of jobs. In this process, on Ashwin 6, 2027 his journey of finding job ended, then he got a new job of which he had never ever imagined in his life. For census data processing on 2027, in Nepal computer named IBM was brought. For working in that computer only, his job started as the operator. To get this job also, he lent rupee one from his friend to fill up the form for this job. Nepal’s first operator’s honor has also gone to him. In this achievement, Uprety remembers John Adama. In written exam, he came in number 1, he taught using the computer and became the first operator.

Today’s youth may not know much about IBM 1401 computer. This computer was first computer that was brought in Nepal, whose shape is like a big room’s room. We might feel surprised seeing this much change in technology. 40 years ago, the computer which looked like a small house, now can be used keeping in a hand and also in a pocket. That also hundred times powerful and thousands time having more memory. With this change in information technology, these days we can manage and process

That machine didn’t understand these days’ language. At that time, program like Cobo, C and Java was not used. Computer hasn’t got network access. In that computer, it had only 16 KB memory storage.  To entry the data from the paper, they had to entry one by one using a card. That card has to move to another place for processing. Uprety said, “That work was very stressful. Like present, there were no gigabyte and terabyte, there were only 16KB storage.” He has experience of 18 months just for preparing and processing the census data.

The time, when there were no words like computer in Nepali’ dictionary, from that time Uprety has experience of using computer has made new systems in Nepal’s big organizations. The computer named IBM 1401, which was brought on lease on 2032 was decided to keep in Nepal only realizing its importance. After 2032, this was used in custom, auditor control, Oil Corporation including agriculture and business billing. In 2032, the organization named mechanical urbanization was established. From 32 to 38 year, technology had leaped drastically.

From 16 KB storage, it reached to 1MB. The use of floppy disk started. After that keeping IBM 1401 in stock, Uprety shared the experience of using Apple Macintosh. From 2039BS (1982AD) only, in Nepal, Macintosh computer came in use, in which 8 inch floppy drive was used. With this development, in Nepal, using of computer and teaching organization’s need for computer was felt and then National Computer center was established. With the start only, Neelkantha started working in Computer Center in needed sectors. After the establishment of National Computer Center in Nepal, different types of works are done through computer. This was used in various national sectors. The technology was started to print out the result of SLC exam. Uprety said that with the help of foreign best computers and engineers, many good things were done.

As, it was must to work in computer, in 2039BS (1982AD) Uprety went to Britain and studied one year course on computer science. After that in 2047BS (1988), he graduated Master’s in Computer Science from Stratford University, UK. Uprety, who was working as the first male person to use computer in Nepal, came back to Nepal on 2046 after Democracy. After Democracy, on 2048, it was must to hold the election program. For election’s technical support, eligible candidates were searched and Uprety became the first priority. As result, he left National Computer Center on 2047 and entered in Jestha 28’s Election Commission. After that Uprety’s life took a new mode. Having success in Election Commission job and at another side National Computer Center’s situation is being linked with his employed life and have taken the new mode.

After entering in Election Commission, Uprety started working on bringing new changes with help of technologies. In the different phases of the local elections, mid-term election of the Constituent Assembly elections, his role was powerful. With the use of technology, election process can be made managed and good system can be established, so with this thought he kept on going with this process, then as a result, after the result of election of 2051, all the work was made digitalized and with this thought all the Nepali citizens started voting with computerization method. With that, in 2054 Nepal Computer Center was dissolved, of which Uprety had a dream of bringing change in technology, it lead him to disappointment. Still, he kept on working for making the election system managed with the technology. In the constitution election of 2064, in no. 1 place of Kathmandu, electrical voting was done. After that, in 2064’s sub-election, with his leadership in 7 places, the digital voting was done.

Uprety don’t take it as a great achievement. This was only the one way communication machine which was brought from India. He believes that, now the election can be done with the high-level machine. The voter registration and the data center made in the Election office and high-level software, now election commission has gone to a technical system. His dream of happening constitution and doing managed election, just remained as a dream only. Uprety who was retired from election commission head in last year’s Kartik 21, still is ambitioned to make the election happen with the system that he has introduced. If the country feels his requirement then, he is ready for that.

Neelkantha Uprety has experienced of using the computer similar to a house to today’s mobile computing world. He started using email from mercantile since it was first introduced in Nepal on 1997. He is still using that email id. Except election commission, he got opportunities to work in other various organizations. At the time of establishment of Computer Association Nepal (CAN), he was most eligible. Being CAN’s former member from 2004 to 2006, he hold election in Afghanistan through United Nations. Today also, he get invitation for presenting election process in paper in United Nations and other many international organizations. Though he is retired from election commission, his busy schedule has not decreased. Uprety who has gained long experience of election, is distributing its idea to foreign countries as an international personality. He has complaint that, Nepal government is not being able to work as expected within the country. In our country, as technology was never given any priority, e-governance could not be established, he said.

Uprety who has understood all the things of politics never had any interest on politics, that doesn’t mean it is a question for politics. For this, making election system has always been his priority. At other side, he said that, he doesn’t time for politics and don’t even have any inner interest in it. With professional life, his personal life is also very successful. In 2033, he was married to Shanta Pokhrel. In last Mangsir 22, he celebrated his 39th Marriage Anniversary. His one daughter Nisha Uprety is an engineer, who lives in America. His elder son Dr. Niraj Uprety is doctor in Australia. And his younger son is studying MBA in America. Why this successful family is in abroad? For our question, his answer was Nepal’s situation and quality of education.

In life, he didn’t move on saying that I will be this/that person. Uprety who has habit of doing all the works successfully, has reached to this place with his hard work. He has understanding that, if any opportunity that comes in any time is utilized and move on accordingly, then success is no far. Sorrow and happiness is the two phases of life. It depends upon taking a thing as how much sad thing and how much happy thing. At the time of shortage, if he gets any work then he get relieved. His happiness was very big when he graduated SLC exam on 2025. His saddest memory was losing his father. His father asked to meet him but he couldn’t make it. That was the saddest thing according to him. IN his life, another happiness was to add, if the constitution was made in Nepal. After that the success in election in his leadership and the technology he made.

With success, he has got dozens of honors and awards. 63 times, Nepal Bhusan, Gorakha South Bahu awarded Uprety, he was engaged in other social works and teaching organization other than being employed in Election Commission. He has big contribution in development of curriculum in Kathmandu and Pokhara University. Helping in the sector that he can and working in social organization, we can call Uprety as the person with higher thinking and a simple person and that wouldn’t be hesitating. Uprety said that, youths living with techno lifestyle should compete Nepal with other countries. Uprety, who says that Nepali religion, culture and tradition shouldn’t be forgotten, like him if we do hard work in related sector that it won’t take much time to change the country. If youths get inspired from his journey of life and success and put another brick for the development of country then it would have been a pleasures thing.

What Should Nepal Learn From Technology Development In India?