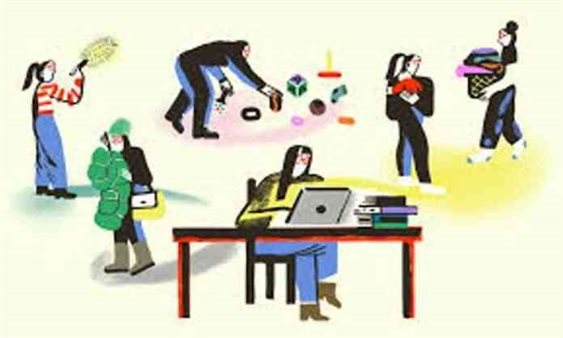 After the lockdown, in most households, all the family members are present. Offices of parents are closed, and so are the colleges of the children. While most family members are staying free in their house, it is not the same in the case of women. Many women are still busy with their so-called “gender roles.” It has become a complaint in many families that the male members of the family are mostly active with their mobile phones and TV whereas there are women who are doing all the household work.

This unhealthy practice of piling up household work to the women and not helping them do not just prevail in villages. In most of the houses in the city, we can still see these practices.

Why does this system still prevail in society?

Anisha Bhattarai, an anthropologist, associated with Social Science Baha, observes that though the Nepali society has undergone various changes in the community, traditional gender roles are intact. “Patriarchal cultural notion that household chores fall only under the women’s domain is still prevalent dominantly in our society, and unless these notions change consciously, from within the practitioners, both male and female, there would not be any major change in the gender dynamics.”

Gender activist Sanjog Thakuri states the primary factor that contributes to the continuation of traditional gender roles is the socialization process.

He exemplifies this process, “When a boy sees her mother doing all the kitchen and household works like cooking, dishes, and laundry, he also observes that her mother is only engaging and teaching his elder or younger sisters in the family about these works. He grows up with the idea that ‘this is not my work’ and acts accordingly.”

As this is rooted in the children’s psyche since their childhood, he explains that it would be challenging to change the habit.

Rachana Upadhyaya, a researcher at the South Asia Institute of Advanced Studies, seconds Thakuri. She states, “How you perform your gender roles is determined by how one is brought up in and outside the home. These are ingrained within you.”

Men not wanting to add extra burden to their already occupied mind can be another reason they do not take part in domestic work. If they wish to contribute to the kitchen, they have to learn how to cook and clean the mess. Why would they bother doing so when someone is already doing so? This happens especially when they are grown thinking it is a woman’s job, says Bhattarai.

The desire within the men to maintain the supremacy or power that they think they have over women in the patriarchal social structure is considered as another reason why men do not try to engage in domestic work.

How can this be stopped?

Gender roles that have been prevailing in society can’t just change overnight. The system which has been passing since generations can be changed if people have the desire to do so, says Upadhyaya.

As there is lockdown implemented and most occupations closed, Thakuri feels that this can be the right opportunity to engage the children (both boys and girls) in the family in household chores. Focusing on boys mostly, make them learn, practice, and continue this for a lifetime. They need to be taught that all the responsibilities should be shared between them equally.

As these practices have been prevailing due to the way of growing up teh children, why not end this by following proper kids growing habits and environment. Both parents should also try to work in household sectors so that their children can learn from their parents.

It is no time to step away from household work, making excuses of having office work or assignments to complete. It is time to change the worst stereotype rooted inside people’s minds and once and for all. By teaching our children, we can change what had to be replaced long ago.