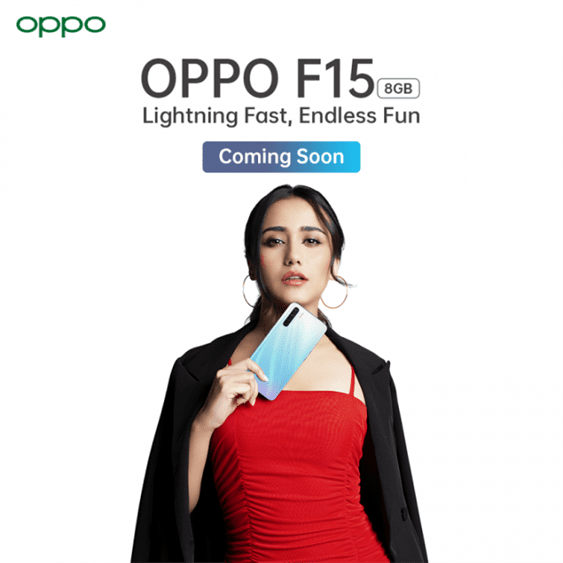 Leading global smart device brand OPPO today announced that it will be launching its latest Flagship smartphone, The OPPO F15 in Nepal. The company has started to tease the launch of the latest device in the F series of smartphones via its social media platforms. OPPO’s Brand Friend, Actress SwastimaKhadka, along with stars from Nepali Film Industry such as  ShilpaMaskey, Anoop Bikram Shahi, NajirHusen, Supermodel SabitaKarki, and Miss. Nepal 2019 Anushka Shrestha were also seen indulging in promotion of the upcoming phone through their respective social media handles.

The F series of smartphones was one of the most popular from OPPO and was first launched by the company in 2016 in Nepal. And now, the company is all set to add to the series by launching the OPPO F15, which it claims will help to elevate the series with its sleek and fashionable design.

The F series of phones is one of the most popular from OPPO and was first launched by the company in 2016. The F15 will be the latest in the line-up from the company.

The company further claims that the OPPO F15 is expected to redefine the standards of lightweight and design making it the most fashionable F series smartphone by OPPO.

The company hasn’t given a specific launch timeline for the OPPO F15 phone in Nepal, however, from the language that the company is using in its teaser for the phone, it appears the launch of the phone could just be around the corner.

Previously, the OPPO F11 Pro was launched with a notch-less display and dual-camera setup, while the regular F11 brought a waterdrop display. Both the OPPO F11 phones were powered by a Helio P70 SoC with up to 6GB of RAM and 128GB internal storage. The phones shipped with Android Pie with ColorOS 6 on top.

As of now the specs of the F15 haven’t yet been officially announced, even though the expectation is that the phone will maintain the certain design elements while improving at the same time on core specs to ensure that the phone can truly emerge as an upgrade on the F11 series. Even though the company seems to be rolling out the phone’s major specs via teasers through its social media handles. So, keep tracking to know more about the device.